Wrongly convicted: the rays that were accused and condemned 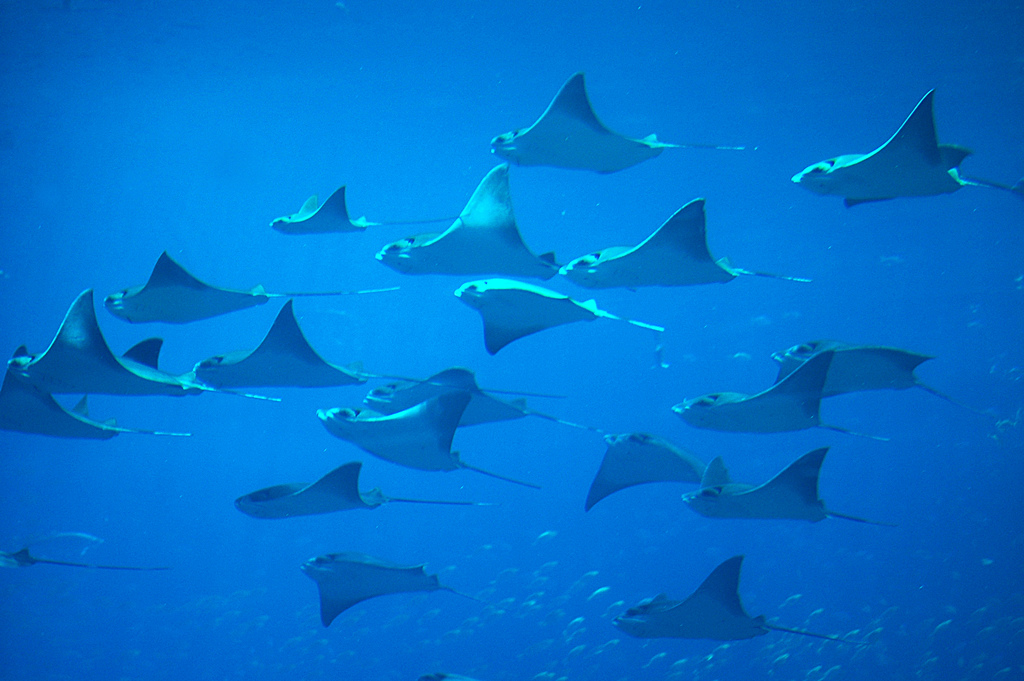 Cownose rays (Rhinoptera bonasus) have been blamed for the failure of oyster populations in the Chesapeake Bay and have been made the target of a reactive fishing campaign – but marine biologists have now claimed that the species has been unfairly accused, and that unregulated fishing of cownose rays may cost the Chesapeake Bay yet another native species.

The oyster fishery of the Chesapeake Bay has a long history as a cultural staple of the American Northeast. In colonial times it was consistently remarked that the oyster reefs of the bay were tall enough to scrape the hulls of large ships far off shore, yet today only one percent of that historic population remains. Generations of overzealous fishing of Chesapeake’s oysters led to their collapse, with catches plummeting to an all-time low in the late 1980s. Since then, the Chesapeake oyster fishery has limped gamely on while the population struggles to recover.

Nine years ago, a study was published that offered a startling new explanation for the oyster fishers’ woes. Something was indeed gobbling up the oysters, the study suggested, but perhaps it wasn’t humans after all. From the blue depths of the sea an unlikely culprit emerged: the cownose ray. Cownose rays are a familiar part of summers in the Chesapeake Bay. © Ed Schipul/Flikr

Cownose rays can be found along the eastern coast of the United States and every summer they migrate from near and far to gather in the Chesapeake Bay for breeding and to give birth to their pups, and, the study from 2007 suggested, to gorge on delectable shellfish.

The study argued that the recent, rapid decline of large shark species such as dusky sharks and sandbar sharks had freed cownose rays from being hunted by these predators, and that consequently the population of cownose rays had sky-rocketed and resulted in thousands of ravenous rays vacuuming up Chesapeake’s defenseless oyster population from the seafloor.

The shark-ray-oyster connection was promptly immortalised and constantly referenced in textbooks, classrooms, and other scientific studies as a classic and well-known example of a trophic cascade, whereby the decline of one species indirectly harms another.

However, a recent paper co-authored by marine biologists from the Florida State University and Coastal Marine Laboratory, the National Marine Fisheries Service, and the Virginia Institute of Marine Science demonstrates compellingly that even the initial 2007 study proposing a shark-ray-oyster trophic cascade is not the smoking gun of indisputable evidence that it was universally made out to be.

After the 2007 study, there were plenty of oyster fishers in the Bay willing to believe that cownose rays were partially (if not mostly) responsible for the collapse of oyster populations in the 1980s and their subsequent inability to recover. Fishers testified that they had personally witnessed how quickly hungry cownose rays can devour an unprotected oysterbed.

In the trial of public opinion cownose rays were found Guilty, and the government of Virginia agreed. They began to seriously consider establishing a fishery for cownose rays on the basis of eliminating the competition for the Bay’s few remaining oysters.

Several marine biologists and ecologists warned against this proposal. They pointed out that cownose rays grow slowly and reproduce little – typically birthing only one pup a year – and that attacking them in their haven where the entire population comes to breed and pup is a recipe for overexploitation.

This precarious scene has been played out once before, in Brazil. Once a fishery for Brazilian cownose rays (Rhinoptera brasiliensis) was established in the 1980s, the population was very quickly and very heavily overfished. Within just two decades the Brazilian cownose ray was listed as Endangered on the IUCN Red List and may soon become Critically Endangered without drastic intervention.

Such a scenario could easily occur in the Chesapeake, scientists cautioned. Any fishery for the cownose ray would have to be tightly monitored and controlled to avoid a similar tragedy.

The state of Virginia responded to these warnings by launching the ‘Save the Bay, Eat a Ray’ campaign, to foster a taste among the public for cownose ray flesh. With the claim that reducing cownose ray populations would restore the natural ecology of the Chesapeake Bay by allowing habitat-building oysters to recover, the cownose ray became the victim of an aggressive marketing scheme that painted it as a villain and a scourge. Ray wings were pushed at ‘eco-friendly’ restaurants and widely promoted as a green and sustainable seafood choice.

In addition to a fervent state-led fishery, cownose rays have also been subjected to unregulated recreational bow-hunting tournaments. Every breeding season, tournament participants aim for the largest cownose rays they can find—nearly all females and many heavily pregnant. As one ray hunter remarked in 2014, “A lot of the times before they get to the scale, the pups are already coming out. They try to retain the pups inside to get more weight.” In addition to concerns about wastefulness (rays are shot not for consumption but for competition, therefore hunters shoot as many as possible and most kills are discarded afterwards), the bow-hunting tournaments have also raised criticism for potentially unethical treatment of the rays. The animals are first shot with an arrow and then hauled onto deck and not-so-neatly clubbed to death. The state of Virginia has no real estimation for how many rays are killed in these recreational tournaments and imposes no catch limits on them whatsoever. It is truly a free-for-all, a war declared on cownose rays as if they were an invasive species and not a native inhabitant of the bay.

Although many scientists have been critical of the state of Virginia’s decision to pursue cownose rays since the inception of the new fishery, this recent paper argues that the data used in the 2007 study was too limited in scope to be used for such broad, sweeping extrapolations and generalisations.

Evidence suggests that large sharks aren’t particularly important predators for cownose rays, so the decline of large sharks should not have affected ray populations so drastically. Furthermore, the supposed “explosion” of ray populations may not have even occurred. Considering how slowly the species reproduces, the authors calculated that cownose rays are not even capable of the population boom they were accused of, even if they had no predators at all.

Finally, the paper challenged the most passionately-cherished assumption of all: that cownose rays are insatiable devourers of oysters. In fact, several studies on cownose ray biology had found that the rays do not prey on oysters nearly as much as was feared, and are also only physically capable of eating the small ones. When the paper’s authors examined the timing and locations of oyster declines compared to cownose ray abundance and distribution, they found even further indication that the allegedly condemning evidence just wasn’t lining up. The state of Virginia had convicted an innocent species.

Based on all the data they’d amassed the scientists concluded that “there is no evidence that cownose rays were the cause of the [oyster] declines, but rather have been portrayed as scapegoats for these declines.” The real culprit beyond the vanishing oysters was the same species it had always been: Humans. It is unknown how many cownose rays are caught as bycatch on top of the ray fishery itself. © Virginia Sea Grant/Flikr

Overfishing has depleted the oysters and there is a very real chance it may deplete the cownose rays as well. The entire ray fishery, the state-led ‘Save the Bay, Eat a Ray’ campaign, and the persistent efforts by public officials and seafood companies to push for aggressive hunting of cownose rays was at its essence based on one theory proposed in one study, without waiting to see if that theory would be backed by hard evidence or actual ray biology.

Pressure by oyster fishers and other vocal groups eager to blame cownose rays launched an uncontrollable fishery, a ray-hunting force subject to almost no management or monitoring whatsoever that targets a species inherently vulnerable to exploitation. As the authors of the recent paper note, “There are no estimates of cownose ray population size and have been no efforts to estimate what level of fishing mortality [fishery catches] represent.”

Marine scientists have been sounding the alarm on the cownose ray fishery for years. Hopefully, their warnings do not fall on deaf ears yet again. It is absolutely imperative for fisheries management and policy makers to rely on replicated studies, the advice of scientists, and effective monitoring of stock populations to avoid exactly these kinds of fiascos. By the time the state of Virginia creates a true management plan for cownose rays, it may be for the purpose of rebuilding a collapsed population.