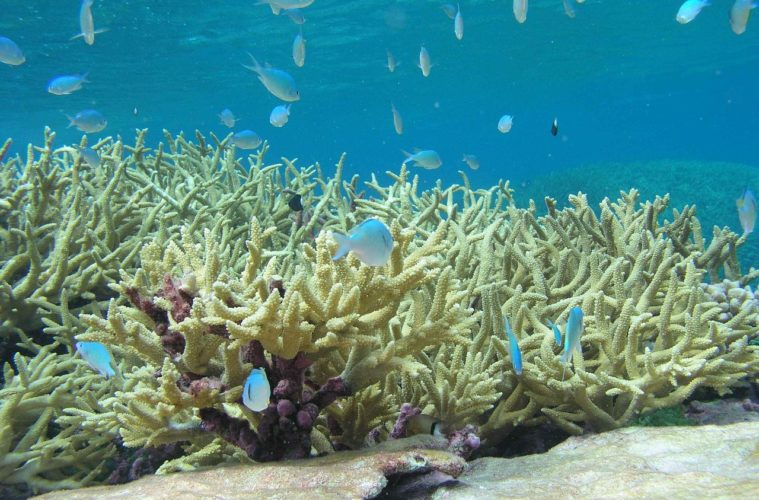 Important reef building corals in decline thanks to recent impacts

Coral reefs are in trouble around the world. Rising sea levels are threatening to wreak havoc on these unique ecosystems, which would result in terrible loss to the diversity of the seas. A recently study, concentrating on the branching Acropora corals, has made some further worrying discoveries about the state of corals today.

Acropora, also known as staghorn corals, are one the main building blocks on the reef. They are a branching, fast growing coral and form the foundations of the reef on which other corals can thrive. These corals have been around for at least 50 million years and have established themselves as one the most abundant species on the reef. But now, they are experiencing sharp declines in numbers across the globe.

Professor John Pandolfi from the ARC Centre of Excellence for Coral Reef Studies at the University of Queensland explains the importance of these corals. “Acropora became a dominant reef builder about 1.8 million years ago,” he says. “And coral reefs have been so successful ever since then due in part to its ascendance – indeed, reefs grow most rapidly when staghorns are the dominant reef-building corals.”

Using historical sea-level data and global coral occurrence, the researchers were able to determine the Acropora abundance throughout history and understand how it responded to environmental changes.

The team found that staghorn corals were surprisingly resilient to historical sea level changes, thriving where other corals could not cope with the fluctuating environment. Staghorn corals grow relatively quickly and can reproduce through asexual fragmentation, in which branches that are broken off from the main coral can disperse and grow into adult corals themselves. These factors made the corals historically resilient to change.

However, even this hardy coral has struggled to adapt to more recent changes in its habitat, brought about by the actions of humans. In Australia, staghorn numbers began to drop around the same time that European settlers introduced changes in surrounding land-use. And more recently, these corals have decreased in abundance due to bleaching and disease, resulting in their complete absence from a number of reefs around the world.

“These are the corals that have allowed reefs to prosper during past intervals of rapid sea level change.” explains Dr. Ken Johnson from London’s Natural History Museum. “But it seems as if staghorn corals will be compromised in providing this service in the future, even as we anticipate sea level rises over the next century.”

Lead author Dr. Willem Renema, adds that staghorn corals provide even more benefits to the reef. “Staghorn corals contribute strongly to the structural complexity and three-dimensionality of reefs. Therefore, they play an important role in the ecosystem services delivered by coral reefs. This includes coastal protection and providing habitat for reef-associated biodiversity.”

Staghorn corals are clearly an important part of the coral reef, and without them other corals struggle to get a foothold.

“One need only look as far as the algal-dominated reefs of the Caribbean to find a future in the absence of staghorn corals,” said John Pandolfi. “However, there is hope. Relieving local pressures on staghorn corals – for example, by improving water quality, helps increase their resistance to thermal stress from climate change. So by managing local anthropogenic stressors such as sediment runoff, dredging, and other sources of pollution, we can insure that these corals will be at their best when confronting global warming.”