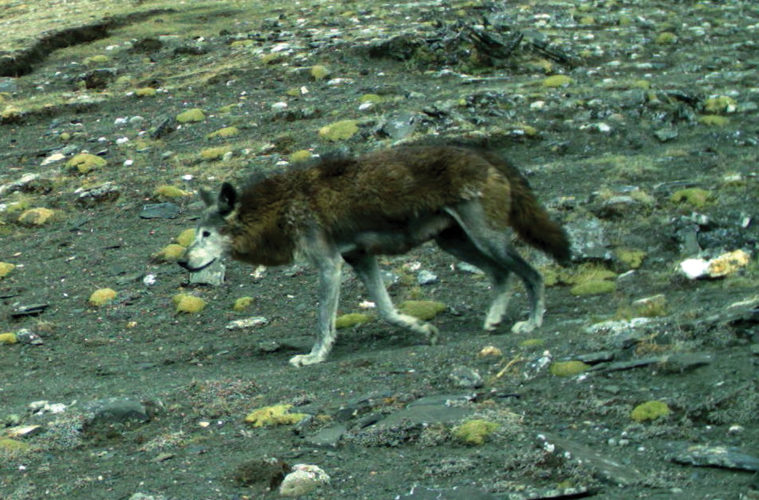 Widespread across much of Northern America and Eurasia, the grey wolf (Canis lupus) is instantly recognisable as one of the northern hemisphere’s most famous land predators. Incredibly, due to its radiation across such a wide area, the grey wolf can be divided into around 40 separate sub-species. Yet, perhaps due to it’s secretive nature, little was known about the distribution of one of the most ancient of these lineages – the Himalayan wolf (Canis lupus chanco). But now, an international research team have discovered the wolf in the Annapurna Conservation Area of Nepal.

Himalayan lineages of the wolf branched at an earlier point in the ‘tree of life’ than other grey wolf lineages. This split may have taken place as early as 0.8 to 1.5 million years ago. This is so long ago that studies suggest these wolves are divergent from the globally distributed dog-wolf clade.

This ancient divergence means that the Himalayan wolf has many unique traits. First and foremost, it is smaller in size compared to the European wolf, with stumpier legs and an ‘unusual’ elongated muzzle, arrayed with black speckles. It also has many characteristic markings, including distinct white colourations around the throat,  chest, belly and inner legs.  Perhaps its most distinctive feature is its woolly fur. No wonder it has been nicknamed the ‘wooly wolf’! A pair of Himalayan wolves in their natural habitat. © Madhu Chetri

As part of the study, DNA sequences were extracted from four fecal samples obtained from the Annapurana Conservation Area. A small number of samples, but enough to prove that ancient Himalayan wolves are roaming the mountains of Nepal.

Being such an ancient and unique lineage, the discovery of this distribution is promising news. However, the species is under worrying threat and has suffered serious mortality. The wolf has been placed under the National Parks and Wildlife Conservation Act, 1973 of the Government of Nepal and is listed as Critically Endangered in the National Red List.

To help determine the root of the issue, the researchers conducted a series of interviews with the people who are affected by wolves the most: herders, livestock owners, nomads and village elites. The most serious issue surrounding wolves in this area is retalliation after livestock predation. For many, farming is their livelihood, so naturally excess death of livestock from wolves causes concerns and negative perceptions. For many of those affected, persecution of the wolves appears to be their only option.

Clearly, this persecution can’t continue. “These genetically distinct Himalayan wolves deserve special conservation attention, at the same time that the conservation of this species in a context of human-wildlife conflict is challenging,” the paper concludes. “A species action plan needs be formulated that develops mechanisms to minimize conflict, and strategies for motivating local communities towards wolf conservation.”