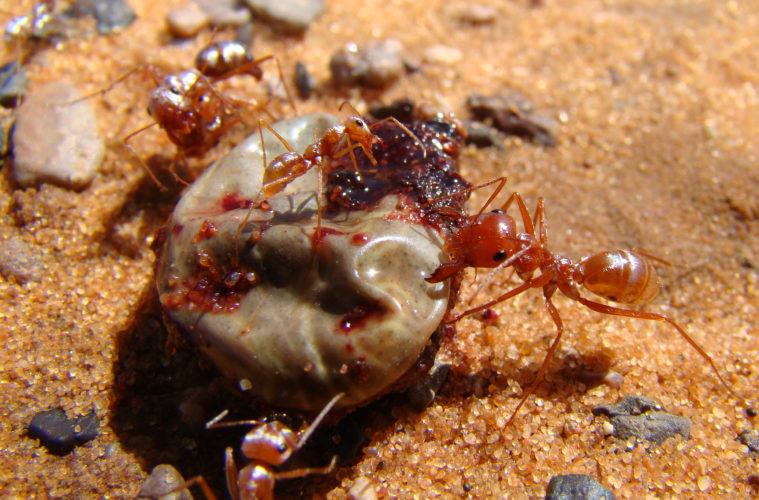 Silver ants give our best inventors a run for their money – how do they do it?

Human inventiveness is quite incredible. From the wheel to the automotive, the alphabet to the printing press, the pin-hole camera to the flat screen television. However, even if Galileo, Da Vinci, Tesla, Edison, Stephenson and company were somehow able to put their heads together they would still find one rival: evolution. Scientists have been unravelling its mysteries for centuries, and have now discovered what gives the Saharan silver ants (Cataglyphis bombycina) their futuristic sheen, and why.

Evolution’s endless process of random trial and error has produced thousands of innovations that, for all our best efforts, humankind has never been able to dream up. There’s an entire field dedicated to plagiarising nature’s best inventions. It’s called bio-mimicry, and it’s responsible for some amazing technology. Velcro is based on the seeds of the burdock plant; the front of Japan’s bullet train is modelled on a kingfisher’s bill; there are adhesive tapes being developed based on the feet of geckos and coatings for boat hulls inspired by shark skin. The possibilities are endless.

So where do ants fit into this? Well, like all insects, ants are poikilothermic; meaning that their body temperature fluctuates with that of their environment. This strategy has lots of advantages, like lower energy requirements, and it’s employed by the majority of animals on the planet.  However, it poses a problem if you live in either a very cold or a very hot environment, like the Sahara Desert for example.

When temperatures during the day soar up to 50°C, overheating is a serious problem. Most desert animals choose to hide in the shade during the midday heat, giving the Saharan silver ant a window to forage without the threat of predation by lizards. In order to cope with the heat this species has evolved an inspired solution: a coat of shiny hair. The principle is simple; reflect light, stay cool. The way in which this is achieved though is a little bit of genius; as a group of researchers from Belgium recently discovered.

Upon closer inspection using an electron microscope, they found that the hairs of these ants are not cylindrical. They are in fact triangular in cross section and have a corrugated surface. This gives them some unusual optical properties, much like those glass prisms you might remember from physics lessons. It was found that when a ray of light hits one of these hairs it is reflected back off of the inner surface on the opposite side. This process is called internal reflection and it’s what gives the ants their striking silver sheen. The corrugated surface makes the hairs even more effective; meaning that light coming from almost any angle is totally reflected back out.

To examine just how effective this hair is for regulating body temperature, the team had an usual day’s work and actually shaved some of the ants, before putting them under simulated sunlight. This showed that the hair had been responsible for almost a tenfold increase in light reflection. When shaved, the ants’ body temperatures were up to 2°C hotter. If you’re thinking that doesn’t sound like much, remember that if your own body temperature went by 2°C you’d be suffering a serious fever. For these ants the difference is life or death.

Will humans be inspired by the ants’ silver hairs and produce some remarkable inventions? Maybe the fashion world might get in on the act, perhaps a sun hat made with high tech triangular thread, as no-one could deny the Saharan silver ant looks fantastic!