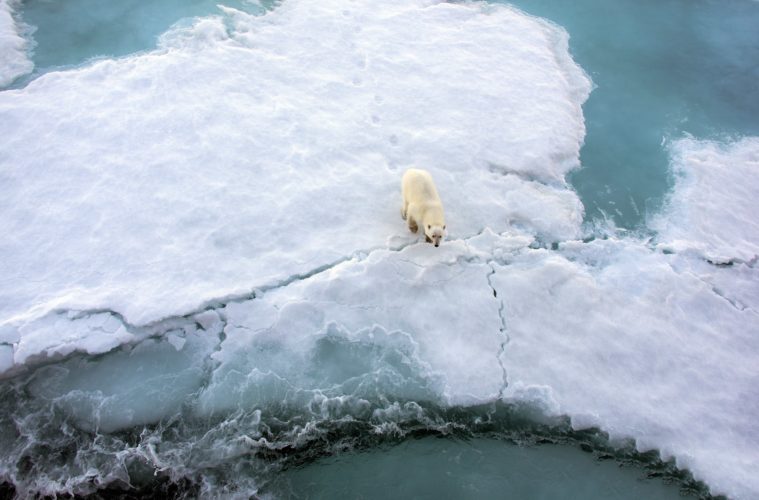 When we think of climate change we conjure up powerful images of melting ice caps and hungry polar bears (Ursus maritimus) stranded on ice floes, desperately trying to find food. We are constantly reminded of the threat a warming world poses to the arctic environment and its magnificent creatures.  In fact, environmental change is happening faster in the Arctic than anywhere else. New research published in the journal Ecography helps confirm these threats, by showing that polar bears have to migrate greater distances in order to find food on the ever dwindling sea ice.

Summer is a difficult time for polar bears. As the temperature increases and the ice melts, it becomes ever more challenging to find suitable hunting grounds. In the winter and spring, polar bears are able to hunt their favourite food – seals – when they pop their heads out of breathing holes in the ice. But with the ice breaking up faster, polar bears find themselves doing something they don’t like to do: swimming.

Polar bears in the Beaufort Sea and Hudson Bay were fitted with satellite collars, which fed information about their movements back to the researchers over an 8 year period. From this, they could tell when the bears were having to swim out from the ice or the land.

Coupling their results with a previous study, the researchers discovered that as the extent of open water increased year on year in the Beaufort Sea, so did the  proportion of bears swimming to migrate.  Over the last few decades the sea ice in the Beaufort Sea has undergone drastic and rapid change. In 2012 there was a record low of September sea ice and this was linked with the largest proportion of bears that made at least 1 migratory swim.

The distance of pack ice from land, the speed of ice retreat and the rate of open water gain vary in different polar regions, meaning that climate change will also vary.  For example, polar bears in Hudson Bay could be considered lucky – the sea ice conditions here were often more preferable, meaning the bears did not have to make as many long and costly migratory swims.

The study also compared swimming frequency between different bears. Being solitary species, polar bears show a lot of variation in their migratory behaviour. Females with cubs tended to swim less, or swim with cubs on their back to reduce immersion in the freezing water.  Sub-adults are thought to be the most capable and efficient swimmers. Incredibly, one sub-adult female swam for 9 days and covered 404km! This dwarfs the median swimming distance for the study, which was 92km.

Although these swims might appear amazing natural feats, extra swimming could have negative implications. Polar bears are better adapted for walking on sea ice, rather than swimming in its melted remains. As a consequence, bears use up vital energy reserves while swimming, which could impact on their survival. Bears may be forced to make their migrations earlier as the ice breaks up at a faster pace.

Ultimately then, future climate change scenarios and the rate at which the sea ice melts in different areas may decide whether polar bear populations survive, or end up balancing on thin, or non-existent, ice.