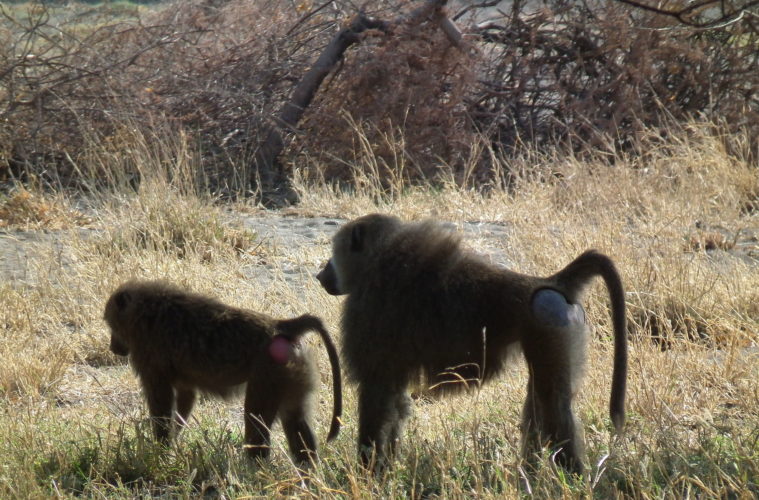 Monkey manners: baboons queue up for food, depending on their status

Baboons are highly social creatures, constantly interacting with and gleaning information from others. New research shows that when they spot a neighbour eating, they head in their direction, and form an orderly queue. But whether they get to eat or not is limited by social factors.

When baboons forage they not only scour the environment for morsels of food, but they also keep a close eye on their fellow baboons, checking to see if they look like they’ve found something to eat, in the hope that they might be able to share it.

Baboons are able to learn from each others behaviours, understanding that certain actions indicate that a fellow baboon has found food. As more baboons clock on to the delicious discovery of their neighbour, they head to the food source, often forming a queue.

The researchers placed handfuls of maize corn kernels, a favourite of baboons, in the foraging paths of 2 troops of baboons living in Tsaobis Nature Park in Namibia.

Through observations, the scientists recorded which individual found the food, and which individuals noticed them do so. They proved that gaining knowledge is of course easier if an individual is close enough to spot behavioural changes in its neighbour.

So a baboon might be more likely to gain information about a food source if it is surrounded by close neighbours, but that doesn’t necessarily mean it will be able to exploit this information and fill its belly, too.

The researchers found that dominance hierarchies play an important role in who gets to the food first. Dominant individuals, which are generally aggressive males, swoop in to a food source when they learn about it, leaving other animals to queue patiently behind. For this reason, subordinate baboons often try to be subtle if they locate food themselves. The composition of the queue is also hierarchical, and is often led by individuals more closely related to the successful forager.

The researchers also found that males and females reacted differently to the information they gained from their neighbours.

Dr Alecia Carter, of the University of Cambridge’s Department of Zoology, explains; “baboons are highly vigilant, and constantly pay attention to what their neighbours are up to. When those in a food patch are sifting through dirt and clearly coming up empty-handed, most females will walk off, and won’t waste their time. Males on the other hand, particularly young males, are amazingly persistent, and will stay in a patch shifting sand around for a very long time in the hopes of finding a stray kernel.”

The researchers think this difference between the sexes is because males can afford to expend more energy than females. Females are nursing young baboons or are pregnant for a large proportion of their lives, so they need to conserve their energy for times when food is more likely to be present.

The study shows that there are several stages to using information from social situations. First, a baboon must aquire information by seeing a neighbour eating, then they must apply it by searching for the food too, and then they need to actually exploit this information by munching on some kernels themselves. With all of these levels combined and the factors that influence them at each stage, it turns out that keeping an eye on your neighbours might be less useful than you might think. The average baboon only managed to exploit social information less than 5% of the time.