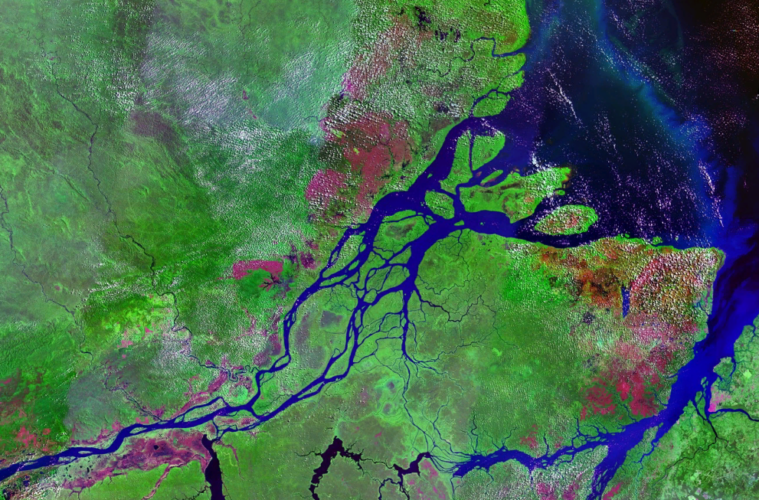 The Golden Age of Exploration has come and gone, and it’s hard to believe there’s still much left to discover in today’s modern world. But every now and then something comes to light that no one was expecting – case in point, a 1000 km reef just discovered at the mouth of the Amazon river, stretching from Southernmost French Guiana to Maranhão state, Brazil.

An international team of researchers recently published a description of the discovery, characterising the vast reef with a range of methods from different scientific disciplines – mapping the geology, chemistry, microbial communities and other biodiversity of the reef.

The reef is dominated by sponges and corals, and though it has considerably lower biodiversity than other reefs like the vibrant, colourful reefs you see in photos, it still hosts abundances of seaweed species, carnivorous fish species, and substantial numbers of spiny lobsters (family Palineuridae) and red snapper (Lutjanus campechanus).

So how did the massive structure go undiscovered for so long? Firstly, the area in question is enormous – around 20% of all freshwater flowing from rivers into the sea across the world comes from the Amazon river. Throughout the Amazons epic 7000km journey through South America, it amasses huge quantities of nutrients and other biological matter from rainforests and agricultural lands. This is all deposited into the sea at the mouth of the river, creating a ‘river plumes’ of silt and nutrients, covering up to 53 square miles.

The murky waters that result are not where you’d expect reefs to thrive, with very little sunlight penetrating the water. Light is vital for reef-forming corals, which have symbiotic relationships with algae that live inside them and nourish them with sugars generated by photosynthesis.  These river plumes were thought to be the main reason for the lack of reefs in that region of the West Atlantic. The main purpose of the expedition was to monitor how these river plumes were affecting CO2 absorption in the ocean, but the researchers decided to search for the reef because of a paper from 1977 that described sponge and fish species, normally associated with Caribbean coral reefs, being dredged up from the Amazon river bed.

The researchers found the reef was able to exist because the types of species around change in different regions, depending on the location and amount of sunlight received. The southern part of the reef is not covered by the plume during nine months of the year, so more sunlight can penetrate and more photosynthesis is possible. This section therefore contains more staghorns and other colourful corals. The northern section is dominated by sponges and carnivorous creatures, as it is shielded from sunlight for a greater proportion of the year – usually more than six months.

There is still much left to be understood about this new reef system – many sponges that were found could only be identified to general classifications, and may in fact be species we never knew existed before. Indeed, the next step is to build a species inventory of the reef, and find out what can actually thrive in this previously unknown reef type.

Unfortunately, just as soon as it has been discovered, the reef may be already under threat. With 125 areas of the Amazon continental shelf auctioned off for exploratory oil drilling operations in 2013, 80 of which were secured and 20 already underway, their impact on the nearby reef may pose a serious threat.

The discovery of this new reef system could not come at a more critical time – reefs worldwide are under threat, and protecting them is something that can only be done if we understand the full range of conditions that different reef types can survive under. Findings like these are important in another sense though – in a time of globalisation, where the natural world seems to be getting smaller and smaller – it shows there is still much left to discover and understand.