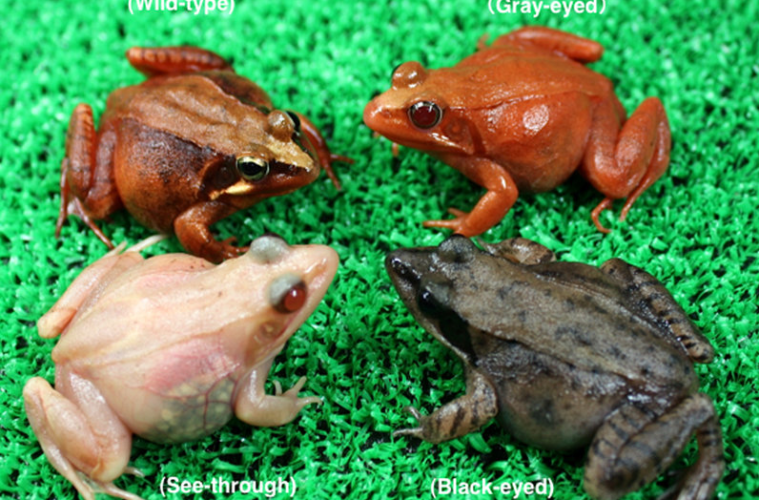 Yes, really. Scientists have successfully bred see-through frogs. Researchers at Hiroshima University in Japan crossed two different rare colour morphs of the Japanese brown frog (Rana japonica), resulting in their offspring being translucent throughout the entirety of their life cycle; from egg to adult.

This study is the first example where a four-legged animal has been bred to be see-through, but the reason for the transparency is relatively simple. The explanation for this phenomenon is that the new frog lacks pigment in its skin. Pigments are the material in animal skin, including human skin, which gives colour. The amphibian cells that contain pigment, called chromatophores, are found in much lower numbers in the see-through ‘brown’ frog.

These cells are particularly sparse on the underside of the frog, making its internal structure very clear. Chromatophores are found in a wide range of animal groups, including amphibians, fish and crustaceans, but are absent in fish and birds. The reduction of these pigment cells in the frog’s skin results in us being able to see through, and into the animal’s body.

Whilst this study is fascinating in itself, it also has a range of applications in the fields of biological and medical research. The opportunity for a researcher to observe what is happening inside the frog’s body eliminates the need for dissection. So, a researcher would now be able to study how the organs develop and change within the frog, without having to harm, or kill, the subject.

This new breakthrough provides us with a literal window through which we can study amphibian development in great detail over the frog’s lifespan, even before it is born and still in the egg. Researchers would be able to monitor the development of this species from pre-birth until death, perhaps revealing the previously-hidden intricacies behind the frog’s dramatic life-cycle.

In terms of the medical applications of see-through frogs, these ‘windows’ into the specimens would allow researchers to observe how cancer cells and toxins spread throughout the body. Further research in this field will likely involve making these frogs fluorescent as well as see-through, as adding fluorescent markers onto specific genes could help medical researchers to understand where cancer starts, and how it invades the body.

So, from the fantastical to the ground-breaking, see-through frogs have given us the opportunity to study amphibian biology, and cancer research, as never before.