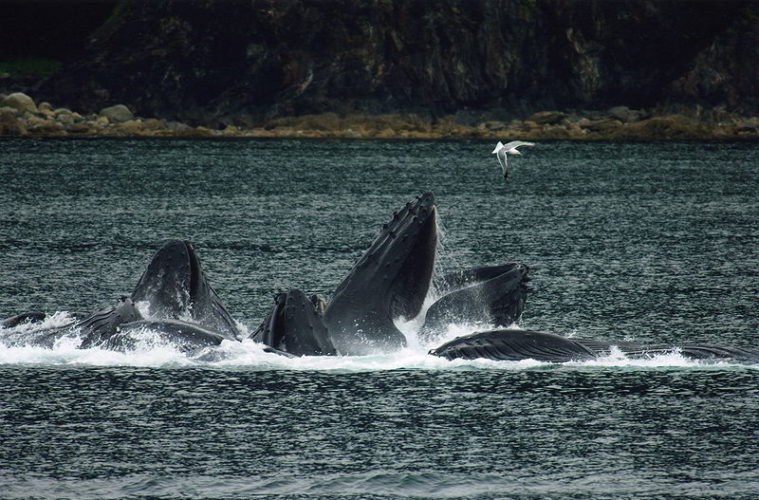 You can’t sit with us: exclusivity in feeding whales

When many different whale species converge on the Gulf of Maine en masse to tuck into the same seasonal bounty of herring, they somehow manage to still keep to themselves, mingling with only their own kind. It is a quirk of whale feeding behaviour.

The idea of marine predators taking advantage of large prey gatherings is a well-documented phenomenon. But in the case of the Atlantic herring (Clupea harengus) breeding season that takes place in the Gulf of Maine, in the North Atlantic, at least eight distinct whale species arrive in great numbers to feast on this vast abundance of fish. In comparison to the plankton that the whales may otherwise be feeding on, the herring provide a wealth of nutritional value – the sheer magnitude and biomass of the herring shoals is simply too good to miss.

To study the whales gathering there, a research team led by the Northeastern University of Massachusetts used a state-of-the-art acoustic sensing device, with a range of 100,000km2, to gain a series of instantaneous snapshots of the noises that these whales are making as they forage for herring in the Gulf. Whales have numerous vocalisations for behaviours and activities such as finding a mate, social interaction, and for coordinating movement during feeding. Each species has its own unique repertoire of vocalisations, which makes it possible to identify whale species solely from their calls.

The team found that this herring gathering isn’t the feeding frenzy that you might expect. Despite the large numbers of whales present, species are not uniformly distributed during the feast, but form species-specific feeding groups. The vocalisations of the whale species, including the humpback (Megaptera novaeangliae), minke (Balaenoptera acutorostrata), and blue whale (Balaenoptera musculus), are found to originate from spatially distinct locations when feeding on the herring, and seldom overlap. So, when these whales converge upon the Gulf to gorge, the different species don’t mingle. The reason for this apparent segregation has not yet been fully explained, but could be a result of the variation in feeding behaviours between whale species.

In addition to the seemingly exclusive behaviours of these whales, there is also the suggestion that a day/night variation in the whales’ vocal behaviour exists. The prey species, the Atlantic herring, forms much denser shoals at night, and the whales appear to be exploiting this. In the case of the humpback whale, vocalisations associated with feeding were up to ten times more frequent during the night.  This increase in specific calls when feeding on herring has implied the existence of specific ‘fish-feeding calls’, which provides more evidence for the incredible complexity of whale vocalisation.

Despite this fascinating insight into how different whale species interact (or in this case don’t!), the real breakthrough is the development of an acoustic remote sensing device that allows marine mammal vocalisations to be sampled over great magnitudes of time and space. The development of technology that is able to sample whale distribution on a large geographical scale is a fantastic tool with which we can monitor the populations and distributions of marine mammals. Only with such technology can we really begin to intimately understand the population dynamics and behaviours of the largest animals on our planet.