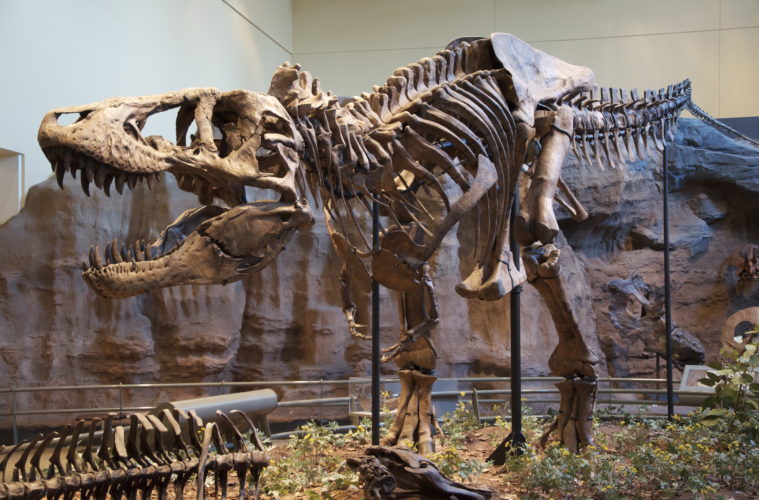 From the chicken sized Microraptor to the huge Giganotosaurus, theropod dinosaurs ruled our terrestrial ecosystems for over 160 million years. These ancient carnivores are often portrayed as voracious, fast-paced and bloodthirsty predators eager to make a kill. Although this may not be too far from the truth, researchers from Ireland and Scotland suggest that scavenging, as well as hunting, was often important for the theropods.

An animal with a large body mass needs a lot of energy to fuel its movement and growth. A great way to acquire this energy is through opportunistic scavenging; eating already dead animals as ‘ready-meals’. Besides the benefit to the carnivore itself, scavenging is also important for recycling nutrients and energy and clearing off disease ridden carcasses – in a way, scavengers act as nature’s clean-up crew. Therefore scavenging behaviour is commonly seen in many of our most famous carnivores such as lions and hyenas.

Although we know plenty about foraging in living animals, we know little about the importance of foraging in dinosaur diets. Should the dinosaur hunt, or scavenge? And how does the size of the dinosaur affect this decision?  Using a computer simulation, researchers rebuilt the Mesozoic environment that dinosaurs would have lived in. Using the feeding activity of living carnivores as a guide, this “Sims for dinosaurs” compared the amount of calories dinosaurs used in different feeding scenarios.

The simulation showed that at the extreme ends of the dinosaur size-scale, scavenging would have been difficult. Body size reflects an animals ability to roam a large area, ward-off competitors, break open caresses and gorge on more food in one sitting. Small theropods could not cover enough ground to find dead bodies on which to feed, and, at the other end of the scale, there would not have been enough carcasses lying around for giant dinosaurs to eat.

However, medium sized dinosaurs between 27kg and 1044kg, such as juvenile Tyrannosaurus rex were able to scavenge just right. “In effect, these species occupied a Goldilocks zone,” says Dr Kevin Healy, Research Fellow in Trinity’s School of Natural Sciences, and co-lead author of the study. “They were big enough to search large areas in order to find carcasses and defend them, but not so large that simply moving became too energetically costly.”

We don’t need to change our classic Jurassic Park view of carnivorous dinosaurs too radically though. Large dinosaurs, such as adult Tyrannosaurs and Giganotosaurus, are more likely to have a specialised hyper-predator role. It appear that no dinosaur could rely on scavenging alone, either; predation always played an important part. So perhaps think of dinosaurs as something flexible, open to opportunity – just like a hyena, but big, scaly, and covered in feathers.