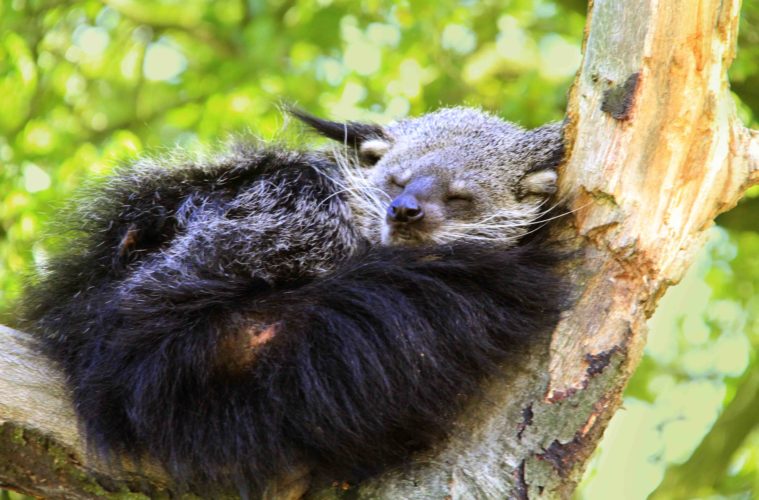 The Mystery of the Binturong’s ‘Popcorn’ Aroma Revealed

Binturongs are the ‘bearcat’ of Southeast Asia. Neither a bear nor a cat, they are an altogether different sort of carnivore. For a start, they don’t actually eat a lot of meat, choosing instead to consume all manner of fruit and veg, invertebrates and perhaps an occasional mouse. They use their tail as a fifth limb, helping them to climb up the tallest trees, where they will stay all day. And they smell like popcorn. Not just in a subtle way, they really smell of lovely fresh, warm, stuff-it-into-your face popcorn.

Their popcorn fragrance has been known to the scientific world for a long time, usually as a curious aside. Most binturong (Arctictis binturong) research has focused on their odd genitals, or the tendency for females to dominate males. These are useful things to know from a conservation point of view, as binturongs are classed as Vulnerable, and in decline. Yet we had no clue as to why or how researchers, and others who had encountered binturongs, were noticing that they smell like a popular cinema snack. What does popcorn and binturong wee have in common?

Lydia Greene and her colleagues at Duke University, USA, have recently found the source of the binturong’s strange bouquet, and published their results in The Science of Nature. Binturongs’ female dominance make them a great species in which to study animal interactions between the sexes, and, in the process of decoding their complicated scenting mechanisms, Greene and colleagues have found the source of their popcorn aroma.

Binturongs are thought to be solitary creatures in the wild, so if they want to hook up with other binturongs, they need a way to let others know they’re around. Scent is perfect for this. Animals can lay down aromatic body secretions that tell others about their identity, their sex, even if they’re ready to mate. Binturongs seem well prepared for this activity; they readily soak their feet and tail in their own urine before walking it everywhere, and have glands around their genitals which secrete a pungent fluid. They even have a special dance where they rub their perineum on inanimate objects.

Greene had samples of urine from twenty-six binturongs. They used a robot nose – a machine that processes and sniffs samples – to analyse the chemical composition of the urinary odours. They found that all the samples contained a compound called 2-Acetyl-1-pyrroline, or 2AP for short. 2AP happens to be one of the dominant compounds produced when corn pops under extreme heat. Binturong don’t just smell like popcorn, they actually urinate the essence of it (and then dance in it too).

Each of the binturongs studied produced 2AP. This hints that popcorn is actually one of the defining ‘signature scents’ of binturongs as a species; one that they use to identify themselves to each other via scent-marks. Greene wanted to know if the essence of binturong fragrance had any other function, and looked for connections between urinary popcorn and other biological markers, such as hormones in the blood. They found that yes, there was a link between the intensity of the popcorn smell, and the levels of circulating sex hormones. Binturongs with high levels of sex hormones tended to have more intensely popcorn flavoured urine. This points towards 2AP being a sexual signal amongst male and female binturongs.

So the discoveries about the binturong have been peculiar and revelatory. Whilst the smell of popcorn may signal to you or me that it’s time to tuck in and watch a movie, it may signify many other things to a binturong. It may tell them that another binturong is near, and it may also contribute to telling them that they’re ready to mate. So their popcorn-pee traces could just be a binturong’s way of saying “Hi, I’m around, let’s hook up…”

Is that smell of warm popcorn still quite so appetising?

reference
Greene, L.K., Wallen, T.W., Moresco, A., Goodwin, T.E. and Drea, C.M., 2016. Reproductive endocrine patterns and volatile urinary compounds of Arctictis binturong: discovering why bearcats smell like popcorn. The Science of Nature, 103(5-6) DOI 10.1007/s00114-016-1361-4
subscribe
Discover the story behind the research through the scientist’s eyes, subscribe to Biosphere digital magazine for access to in-depth articles that bring the natural world to life.