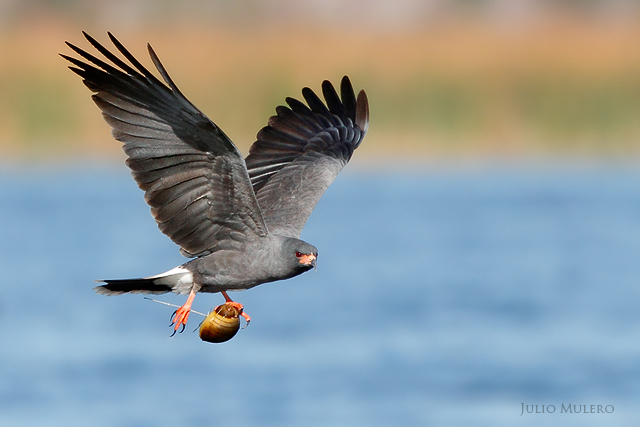 The spread of species into environments in which they don’t historically belong is a factor at the forefront of ecosystem change. The impacts of these ‘invasions’ are often difficult to predict, and can remain hidden until the invasions occur, but examples abound of ‘foreign’ species that move into new geographical areas and have severe implications on local biodiversity.

However, the invasion of a freshwater snail into Florida may be boosting the survival rate of a locally endangered U.S. bird species. The snail kite (Rostrhamus sociabilis), a predatory raptor that feeds specifically on freshwater snails, has been a cause for concern since the 1960s, when only 21 individuals were found in surveys across Florida.

The availability of food is a major factor that controls the population size of kites. In fact, when prey is easy to come by, this acts as a cue for the kites to build nests and raise young. If there isn’t sufficient food available, the snail kites simply won’t be able to provide enough food for their young to ensure their survival, or may not even have the energy to devote to reproduction at all. Previously, the snail kite population in Florida fed nearly exclusively on the only species of apple snail found in North America. Feeding on just one food source makes its population intimately linked with that of its prey. However, since 2002, another species of apple snail (Pomacea maculata) has invaded and become prevalent across Florida wetlands. The snail is native to South America, but has spread into the United States most likely after being released from peoples aquariums.

This new highly-invasive species is bigger, reproduces faster, lives longer, exists in greater numbers, and survives drought more successfully. As a result, the invasion by these snails has influenced the behaviour and population of the snail kite.

There is a risk that seasonal changes in invasive snail populations could result in the kite species breeding at inopportune times outside of their usual breeding season, making it harder for young kites to survive. The range of the new snail species has even caused the kites to move north into less suitable habitat, which had experts worried that this geographical shift would lead to less kites surviving.

However, the snail kite population appears to have benefited from the introduction of this highly-abundant prey source. So much so that the positive effects outweigh the concerns about the kites’ range shift. The new research has shown that the presence of non-native apple snails correlates with an increase in the number of nests made, a higher breeding rate, and especially more young kites surviving. The survival rate of of these juveniles is the measure that most closely infers the true survival rate of the snail kite population in this study.

So it appears that this invasive species of snail has directly supported the previously dwindling snail kite population across Florida’s wetlands, representing a remarkable example in which an invasive species has been a welcome addition. But what of the other species in the snail kite environment that may be influenced by the apple snail? Apple snails are voracious predators of aquatic vegetation, but whether this invader will influence the entire wetland ecosystem as a whole remains a mystery for now.