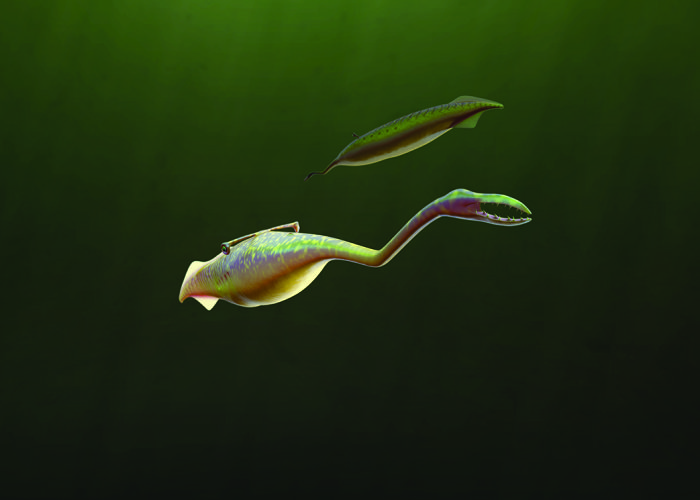 The eyes have it: solving the mystery of the ‘Tully Monster’

The further you go back in evolutionary time, the more bizarre life seems to get. There are a plethora of fossils, dating back to the infancy of animal evolution, that seemingly defy any clear classification in the major animal groups, or ‘phyla’. One of the most well-known of these ‘problematic fossils’ is that of Tullimonstrum gregarium, dubbed the Tully Monster after its discoverer, Francis Tully.

Thousands of Tullimonstrum fossils are known from just one location – Mazon Creek fossil beds, Illinois – and date back around 300 million years, considerably later than many of the other famous ‘problematic fossils’. Reaching around 35 centimetres, it was likely an open water feeder, possibly using its proboscis to probe for prey hiding in the silty beds of the muddy estuaries it inhabited.

At first glance, you could be forgiven for assuming the creature is something straight out of science-fiction. With a soft body, a little similar to that of a cuttlefish, eyes on stalks, and a grasping mouth with eight tiny, sharp teeth on the end of a proboscis, it looked like nothing alive on Earth today.

Palaeontologists have been trying to figure out which group it belongs to since it’s discovery. Some evolutionary biologists, who study these earlier forms of animal with such weird body plans, prefer to consider the animals as making up their own extinct phyla. Some have viewed them as ‘natural experiments’ early in the evolution of animal life, trials of body plans which failed to make the cut, and didn’t persist through evolutionary time.

Others have claimed Tullimonstrum is just a very weird member of a known phylum – proposed phyla have ranged from a mollusc to an arthropod, and even a type of worm. However, two recent studies have suggested Tullimonstrum is in fact a vertebrate – the same group of backboned animals that we are part of.

The first study, carried out by a research team at Yale University, looked at the whole body anatomy. Numerous features associated with early, jawless fish (Petromyzontida)  – such as the eel-like lampreys – were found, leading the authors to suggest Tullimonstrum is an early member of the same group.

The second, more-recent, study was conducted by a team from the University of Leicester. They looked at another aspect of Tullimonstrum’s anatomy, using a slightly less conventional approach. Using a scanning electron microscope, they looked at the fine details of Tullimonstrum’s eyes – specifically for tiny sub-cellular structures (or ‘organelles’) called melanosomes.

Melanosomes are tiny bodies found in certain cells – including, but not limited to, those in the eye. They are both the site of production and storage of a light-absorbing pigment known as melanin, vital to the detection of light. They come in two forms – either spherical or cylindrical in shape.

They found the retina of Tullimonstrum is preserved in some specimens as a thick sheet, with clear layers of both types of spheroidal and cylindrical melanosomes – a feature unique to vertebrates. In annelids (worms), molluscs and arthropods, these structures are entirely spherical. As well as the clear concentration of these bodies in a specific body region, and their structure, a method called mass spectrometry provided further evidence. Mass spectrometry is a technique used in chemistry, which identifies molecules based on their mass. In this case, it was used to identify the presence of melanin in these structures, by comparing the results from pure melanin samples to those of Tullimonstrum.

The researchers, as well as identifying the oldest known fossilised pigments, go as far to say that melanosomes could be an important tool in figuring out evolutionary relationships, as various arrangements seem to be a strong signal for certain groups.

This study could be the first of many more that help solve the evolutionary puzzle of the enigmatic, alien-looking creatures which once swam through ancient shallow-seas, and better understand their connection with life as we know it today.

Image with thanks from Sean McMahon