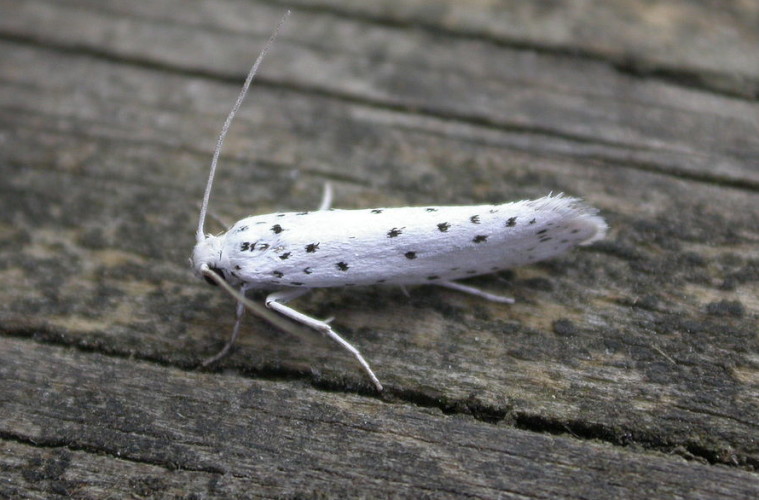 With houses lit in every room and roads flooded by streetlights, where humans reside we light up the night sky, and the resulting pollution of light is known to have negative effects on human and animal populations alike.

We are all familiar with how moths and other nocturnal insects can experience a fatal attraction to artificial lights; and losing individuals in this way can have serious consequences for natural populations. In theory then, natural selection should favour those who are less likely to be attracted to light sources. As a first step towards examining the evolutionary consequences of light pollution, the authors tested differences in ‘flight-to-light’ behaviour in the small ermine moth (Yponomeuta cagnagella), a common European moth species.

The authors collected larvae of the small ermine moth from areas with low and high levels of light pollution in France and Switzerland and reared them to adulthood under laboratory conditions.

The authors suggest we are seeing an adaptive response in moth populations that have been exposed to high levels of light pollution. If fewer moths are exhibiting flight-to-light behaviour, this could reduce mortality in urban populations. However, a concern is that the reduced flight-to-light behaviour may be result from a decrease in the overall mobility of the urban moths. As moths are important pollinators, and provide a prey base for insectivores such as bats and spiders, this could have far-reaching ecological effects.

Recently, there has been a growing movement to reduce the effects of light pollution in urban and suburban areas. While this is an important step, the authors urge that priority should be given to reducing the spread of light pollution into pristine areas. Exposure to light pollution has direct negative effects, but may also result in long term adaptive changes in exposed populations – which could last long after the lights go out.