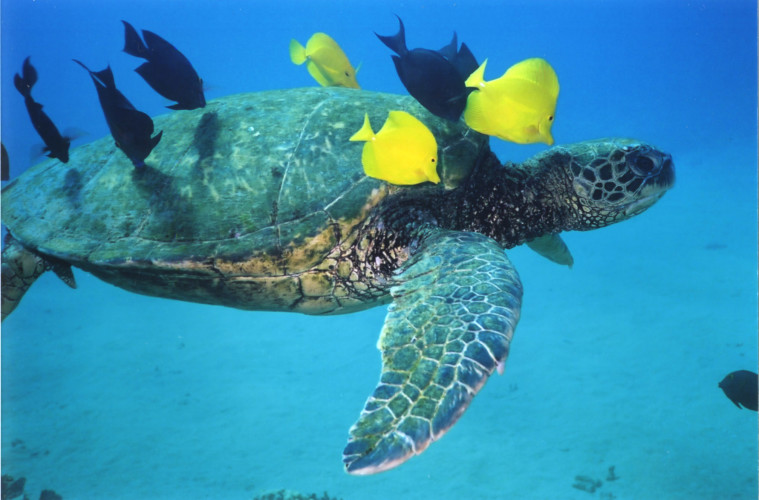 The sleeping habits of sea turtles

The green sea turtle is a species at risk. Habitat loss, pollution and other human activity including poaching threaten its survival. This isn’t helped by the fact that females only mate every two to four years, undertaking the enormous physical task of returning to their nesting beach to mate and lay eggs. This can involve migrations of hundreds of kilometres and, if a turtle has insufficient energy reserves to achieve this feat, it is unable to reproduce, with consequences for the continued survival of its species. Understanding the behaviour and the energy requirements of these turtles is therefore crucial for their conservation.

A new study led by Manfred Enstipp from the University of Strasbourg used accelerometer ‘backpacks’ attached to the shells of adult green sea turtles (Chelonia mydas) in the Indian Ocean to monitor their activity patterns, which allowed them to calculate how much oxygen the turtles were using.

This revealed that turtles spend most of the year foraging in shallow waters, where they feed on seagrass meadows during the day and return to slightly deeper waters to rest at sunset. Shallow waters and bright sunshine (which warms the water) also prompted sea turtles to rest for a while during daylight hours, perhaps to conserve energy.

Turtles rested for around 11 hours per day, during which they used just half the amount of oxygen that they use during foraging. Turtles also dived for longer and consumed slightly less oxygen during the winter when water temperatures are cooler. However, the turtles’ daily energy expenditure was altogether low year-round. This likely allows energy reserves to be built up over time at these foraging sites, which can then be used to fuel migration and reproduction.

Monitoring of turtle activity during a ‘simulated migration’ (a turtle displaced from its nesting beach) revealed that turtles don’t rest during these marathons, which can last for days. Rather, they make frequent short, shallow dives during the day and less frequent, deeper dives during the night, approximately tripling the amount of oxygen they consume. During this time they rely on the energy reserves built up at their foraging sites.

The non-invasive methods used in this study afford us a glimpse into the daily habits of green sea turtles, and also draw attention to the effect that water temperature has on oxygen consumption and behaviour. Shifts in sea temperature are, therefore, yet another factor with the potential to impact upon sea turtle reproduction and survival.