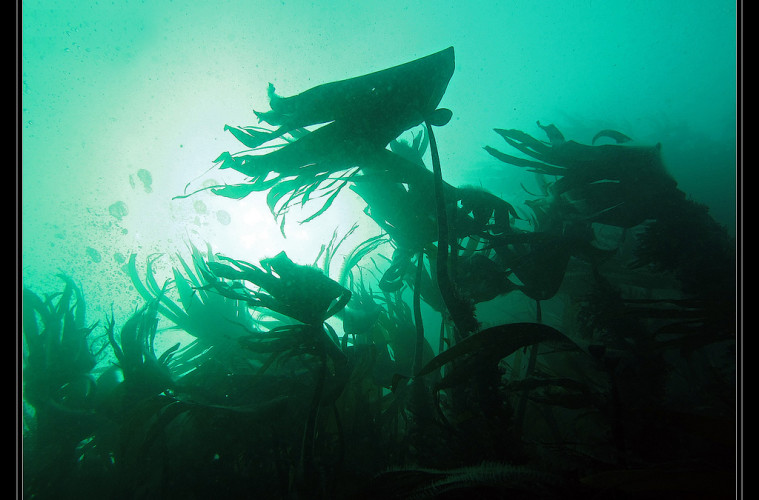 Destroying the Forests of the Deep

Marine habitats such as coral reefs, seagrass beds, and kelp forests are threatened across the globe and recent research has identified yet another area of concern: a deep-water kelp species in the Adriatic Sea that has been destroyed in the majority of its historical range by deep-sea trawling and driven to an endangered status.

The Mediterranean brown kelp Laminaria rodriguezii is a deep-water kelp that lives at the very limit of the photosynthetic range, as far away from the surface as a species that relies on the sun’s energy can possibly get. Shallow kelp forests are well-known for supporting complex food webs and providing habitat for a variety of fishes and other organisms, but because of L. rodriguezii’s virtually inaccessible location it is woefully understudied. It is still unknown how many mysterious deep-sea organisms rely on the habitat this kelp species provides.

Researchers from the Institute of Oceanography and Fisheries in Croatia deployed remotely operated underwater vehicles to assess the current distribution of L. rodriguezii and compared their findings to historical data that indicate the extent of the species’ range in the 1950s and 1960s. They discovered that the range of L. rodriguezii has been reduced by more than 85% since that time. Today, this kelp can be found in only one place in the entire Adriatic Sea: around the small offshore island of Palagruža. Because of this drastic decline, the research team strongly urges giving this species “Endangered” status on the IUCN Red List.

One might think that species in the deep sea would not be greatly affected by human activities, but unfortunately this is untrue. Trawling is a common fishing practice that drags heavy gear along the ocean floor to capture fish and also destroys marine habitat such as coral and kelp in the process. Deep-sea trawling has been especially criticized as unsustainable since both the fish it catches and the corals and kelps it destroys tend to be long-lived and slow-growing, with populations unable to recover quickly.

Deep-sea trawling is the chief reason behind the decline of the L. rodriguezii kelp, and the researchers advise establishing programs to manage and monitor the remaining population. Because of the specific environmental needs of this species, it’s possible the effects of global climate change could cause additional stress; L. rodriguezii relies on cool water temperatures and a warmer ocean may have a detrimental impact, while sea level rise may cause the surface of the water (and therefore the availability of sunlight) to creep just beyond the reach of a kelp already living on the edge of the photosynthetic range.

The loss of kelp habitat in other areas of the world has shown to have severe and far-reaching consequences, and it would be a true shame to allow this deep-sea kelp species about which we still know so little to simply become a case of “out of sight, out of mind.”