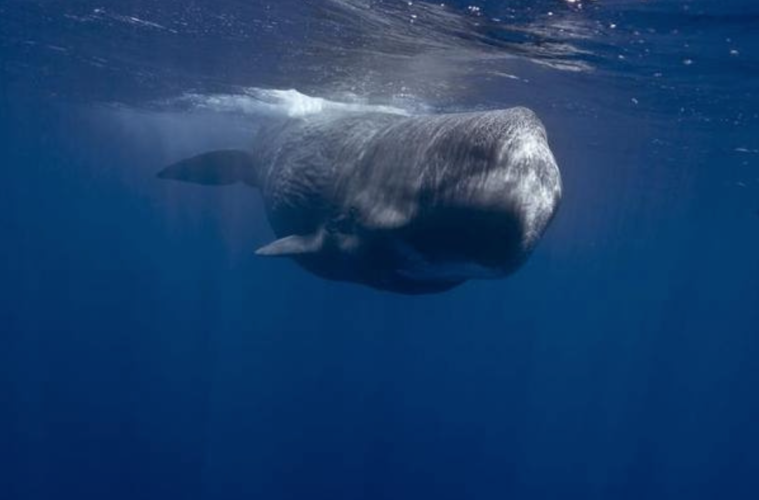 The science behind Moby Dick: sperm whales use their heads as battering rams

With its distinctive, long, rectangular head, the male sperm whale is arguably one of the weirdest looking animals on the planet. Why did it become this way?

New research led by an international team of scientists from Australia, Japan, the UK and the USA, suggests that the male sperm whale’s head might have a destructive role, acting as a battering ram when males fight each other.

The idea that the sperm whale’s head has a ramming function first came from a whaler in the 19th Century, whose ship began sinking when it was hit by a whale. This incident inspired the author Herman Melville to create the famously destructive Moby Dick.

The ramming hypothesis initially suggested that the strangely shaped forehead of male sperm whales evolved to help them fight each other for female mates. However, until now, whether or not the structure of the head allowed for this remained unclear.

“The sperm whale forehead is one of the strangest structures in the animal kingdom,” explains Dr. Olga Panagiotopoulou, the study’s lead author. “Internally the forehead is composed of two large oil-filled sacs, stacked one on top of the other, known as the spermaceti organ and the junk sacs. It is the oil within the upper spermaceti organ that was the main target of the whaling industry in the early 19th century.”

Panagiotopoulou adds: “This whole complex is highly sexually dimorphic which means that it is much larger in males than in females, a pattern commonly found in species in which males fight to compete for females.”

The head of the sperm whale is already known to facilitate other purposes. “We know that the sperm whale head is important in transmitting sonar clicks and there are many other hypotheses about its role in communication and buoyancy,” explains Professor David Carrier, who co-authored the study. “But none of these hypotheses could explain how the sperm whale head could function as a weapon capable of sinking ships that are four to five times the mass of the whale.”

The ramming hypothesis has always been controversial, mainly being dismissed by the scientific community. However, a conservation researcher recently reported that, whilst flying over the Gulf of California, they saw male sperm whales ramming each other. This led the interdisciplinary team of scientists to look into the ramming hypothesis, using technology to model the logistics of the behaviour.

“Creating a computer model to simulate ramming in sperm whales was a challenging task,” says Dr. Spyridis, consulting engineer and co-author of the research. “When analysing bridges, tunnels, or buildings you are given exact measurements and material properties for the simulations but in this case we were restricted to limited published data and we had to perform a series of sensitivity tests to ensure model efficiency.”

The researchers concluded that connective tissues within part of the head known as the “junk” absorb impact, preventing the skull from breaking.

“Our findings show that the mechanical advantage of the structure of the junk may be the result of acquired traits related to selection on male to male aggressive behaviour,” says Panagiotopoulou. “Although male sperm whales may not fight frequently, we know that aggressive ramming behaviour is a common characteristic in the group of mammals from which whales are derived — the even-toed ungulates, the artiodactyls. A closer look into the anatomy of the heads of other species of whales that ram may reveal a variety of protective mechanisms.”

Panagiotopoulou hopes the study will trigger further reserach: “Our study has limitations but we hope to stimulate future research to unravel the mechanical function of the head during head-butting events in other species, where aggressive behaviour has been observed, but remains unmodelled”.