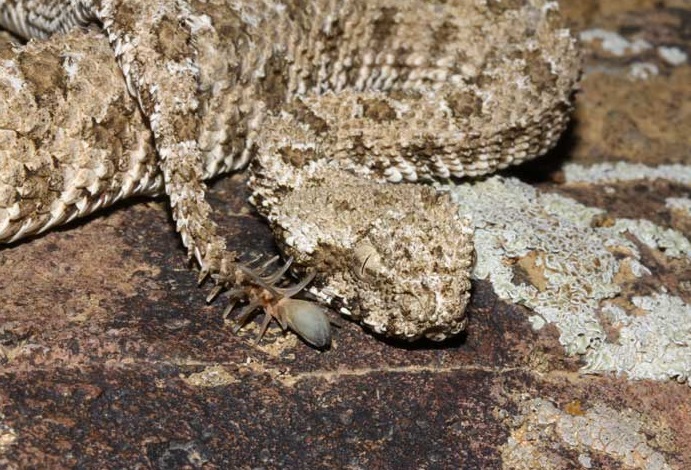 Remarkable footage of the snake showing off its spider-shaped tail and luring in birds hoping for a meal. The spider-tailed viper (Pseudocerastes urarachnoides) is found in the wilds of western Iran.

While this species of horned viper was officially described in 2006, this is the first time a team studying the snake have been able to show-off its incredible and deceptive hunting strategy.

The ‘spider’ is a caudal lure – a form of mimicry that predators use to trick and entice unsuspecting prey within striking range. Other snakes do have caudal lures on their tails, but none can boast such a spider-like appearance. In this case, the lure is made up of soft tissue – very different to the keratin-based tails of the infamous rattlesnake, for example. A swelling creates the body of the ‘spider’, and lengthened scales around this creates the illusion of spidery legs.

An interesting finding in the research also highlighted the type of bird that fell for the viper’s trickery. It turns out that the locals are not so easily fooled. Only birds migrating in from elsewhere end up as the viper’s victims, while the seemingly wised-up natives perhaps knowingly watch on. And the viper doesn’t necessarily have it all its own way – the researchers reported several occasions when the creepy crawly lure was pecked clean off by particularly fast birds!