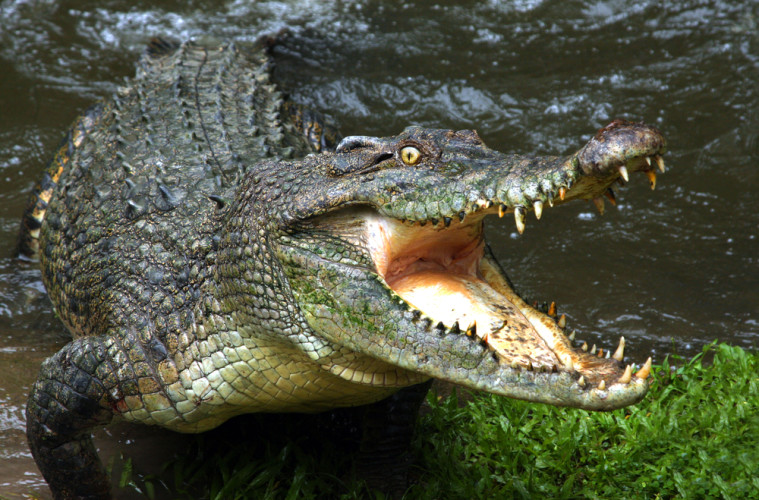 The secret of the crocodile bite

Crocodiles and alligators have the most powerful bite of any animal in the world, and the secret to this strength has just been revealed.

Scientists at the University of Missouri found that crocodiles have a second jaw joint, an addition that enhances the force of their bite. Using a combination of computational imaging and 3D modelling tools, the researchers have been able to model the structure of bone, tissue and cartilage inside the crocodile’s head, allowing them to identify the hidden joint.

The second joint works by distributing force, which stops it from twisting or losing its grip. When a crocodile bites it crushes its prey with an impressive force of more than 16,000 newtons. To put that in perspective, the average human bite has just 500 newtons of force.

Crocodiles live in tropical and temperate regions across the world, in Africa, Australia, Asia and the Americas. They hunt by lurking underwater, ready to launch and ambush that grabs prey and drags them down. When up against large mammals, like buffalo and wild boar, having a particularly powerful bite comes in handy.

The evolution of the second jaw joint suggests that crocodiles are not quite as primitive as we might think. “Though they have a reputation as ‘living fossils’ and indeed have patrolled Earth’s waterways for millions of years, they aren’t just some holdover or relic from the days of the dinosaurs,” says Casey Holliday, who led the study. “In fact, they have continued to evolve and continue to reveal new features that are surprisingly similar in function to those we find in mammals, birds and other animals. Crocodilians are a treasure trove of adaptations that can help us understand the form, function and evolution of many animals.”

The second jaw joint of crocodiles appears to be similar to a joint in our own jaws. This is called the temporomandibular or TMJ joint, and connects our lower jaw to our skull. The similarity means that exploring the crocodilian jaw joint may improve our knowledge of common jaw problems in humans, which are often very painful. Currently, these problems are not well understood.

What’s more, the cartilage of crocodiles might give insights into how arthritis in people could be prevented. Arthritis involves swelling of the joints due to the wear and tear of cartilage. Crocodiles have much thicker cartilage than us, and never suffer from this problem.

“Over on the other side of the animal tree, we have this whole stock of successful animals that don’t have anything like arthritis – they have these huge caps of cartilage that they maintain throughout life,” explains Holliday, “Our hope is that there might be some way to bioengineer gator cartilage for research or even clinical applications to help us deal with human cartilage problems like arthritis.”