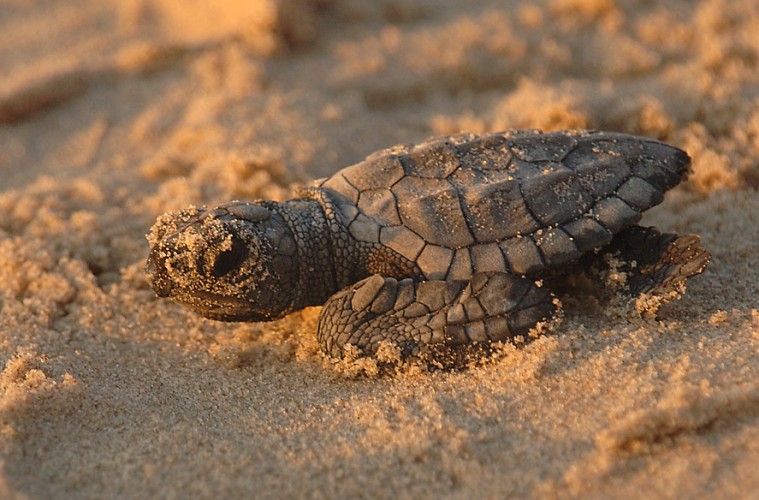 Footage from the forties has highlighted the dramatic decline of the most endangered sea turtle on the planet – the Kemp’s ridley sea turtle (Lepidochelys kempii).

By analysing old footage of nesting turtles, scientists at the University of Alabama found that the world’s population of Kemp’s ridley sea turtles is now just a tenth of the size it was 60 years ago.

After nearing extinction in the 1980s, the USA collaborated with Mexico to conserve the Kemp’s ridley sea turtle, hoping to rebuild its numbers. By 2009, it was showing substantial recovery, but in 2010, numbers declined unexpectedly and have not improved since. The species is currently classified by IUCN as critically endangered.

Kemp’s ridley sea turtles are found in the Gulf of Mexico, but due to a lack of data, it has been unclear exactly how big a healthy population should be, until now.

The researchers recently uncovered a film of the turtles nesting, recorded by Andres Herrera, a Mexican sportsman, in 1947. The footage has allowed them to estimate that between 120,000 and 180,000 individuals were nesting that year,  a stark contrast to the 14,000 individuals recorded in the breeding season of 2015.

Take a look at the original footage here:

The film was created when Herrera heard about the mass nestings from locals, and wanted to document them for society. After 33 attempts, he finally recorded them along the Gulf Coast, just north of Tampico in Mexico. At the time of its production, the turtles in Herrera’s film were not realised to be the Kemp’s ridleys sea turtle, and this remained so for over a decade.

“At the time of the film’s development, no one was able to connect the dots between the phenomenon of the mass nesting and that the nests belonged to the Kemp’s ridley sea turtles,” explains Thane Wibbels, a PhD student who led the study, “Herrera was a hobby enthusiast who wasn’t aware of the pursuit in the scientific world to uncover this location. Meanwhile, Archie Carr, who was considered to be the world’s leading sea turtles expert, had been searching for the nesting beaches for this species for decades.”

Having an insight into just how much Kemp’s ridley sea turtles have declined will aid their conservation, by giving scientists and conservationists an idea of what a healthy population density should be. However, the Gulf of Mexico has changed a lot since 1947, and may not be able to sustain original numbers.

“Because the Kemp’s ridley is so protected, scientists believe that potential factors limiting its recovery may be habitat-related,” says Elizabeth Bevan, one of the study’s authors, “Another hypothesis among the field is that environmental pollution, in particular the 2010 Deepwater Horizon oil spill, may have significantly impacted the population, and many years may be required before the species regains an exponential recovery rate.”