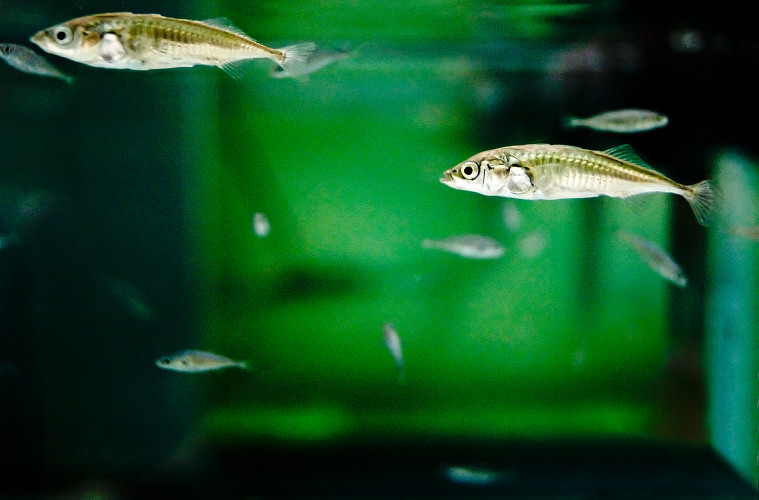 Why do some animals choose to live together with others of different species? A recent study aimed to investigate this behaviour in mixed shoals of three-spined (Gasterosetus aculeatus) and nine-spined (Pungitius pungitius) sticklebacks.

Tanja Kleinhappel, a PhD researcher at the University of Lincoln manipulated the diets of these fish by feeding them either planktonic crustaceans or midge larvae, and then recorded how the fish grouped together.

The researchers believe that subtle diet-based chemical signals play a strong role in this shoaling behaviour. They suggest that free amino acids from a fish’s diet may be recognised by other fish that share the same diet, but stronger evidence for this will require further research.

They conclude that this diet-based shoaling behaviour is likely to benefit fish of either species by increasing the chance that they will locate their shared source of food.

“Associating with fish that smell the same might be all about food and protection. By associating with others that share the same preference for particular types of food, a fish ensures that it has enough to eat,” explained Tanja Kleinhappel, a PhD researcher at the University of Lincoln. “Being surrounded by similar-smelling fish also protects an individual against predators that use certain chemical search patterns to detect prey.”

Groups consisting of a mixture of species are observed often in nature. Groups of different birds and  groups of mammals have been shown to benefit from sourcing food and evading shared predators. However, this study sheds light on the individual-level mechanisms that lead to these groupings. The team hope that their results can be used to further our understanding of social learning and the communication of information within and between fish species.

Discover the story behind the research through the scientists’ eyes, subscribe to Biosphere digital magazine for access to in-depth articles that bring the natural world to life.