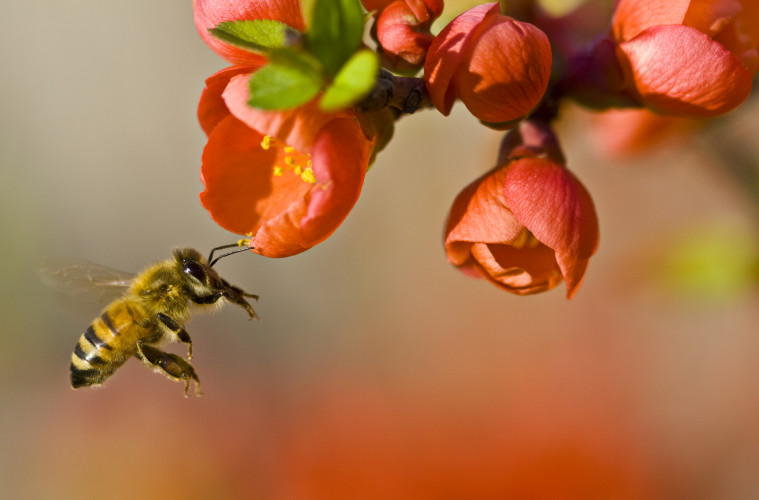 Honeybees throughout Europe are being affected by 57 different pesticides, according to new research. Scientists identified the chemicals using a technique normally employed to detect pesticides in food. The findings, discovered at the National Veterinary Research Institute in Poland, were published in the Journal of Chromatography A.

Pesticides are commonly used across the globe, and are an important part of protecting plants from harmful insect pests. Whilst the use of certain types of pesticides has been restricted – such as neonicotinoids, that are particularly damaging to the environment – a huge variety of pesticides are still deemed safe to use. The recent study looked at 200 different pesticides, 98% of which are legal to use in Europe. The researchers also examined the bees for traces of chemicals produced when the pesticides are broken down.

Overall, a total of 57 pesticides were found in the tested honeybees, suggesting that many legal pesticides may be having an adverse effect on European bee populations. It is no secret that bee populations are in decline all over the world, and the results may help to explain exactly how and why this is happening.

Understanding why bees are in decline is crucial, as they play important ecological roles, many of which are beneficial to humans. Tomasz Kiljanek, the paper’s lead author, highlighted this, saying: “Bee health is a matter of public concern – bees are considered critically important for the environment and agriculture by pollinating more than 80% of crops and wild plants in Europe”.

As pesticides vary greatly, both in their methods of action and the concentrations at which they are used, determining exactly which pesticides are present in honeybees is important. Pesticides can harm bees and other insects in a number of ways, from interfering with their neurology, to inhibiting their ability to feed. They can also damage the immune system of bees, making entire colonies more susceptible to infection from viruses and parasites.

By determining exactly which pesticides are contaminating bees, it should be possible to find out which chemicals they are most vulnerable to. Kiljanek explains: “Our results will help expand our knowledge about the influence of pesticides on honeybee health, and will provide important information for other researchers to better assess the risk connected with the mix of current used pesticides.”