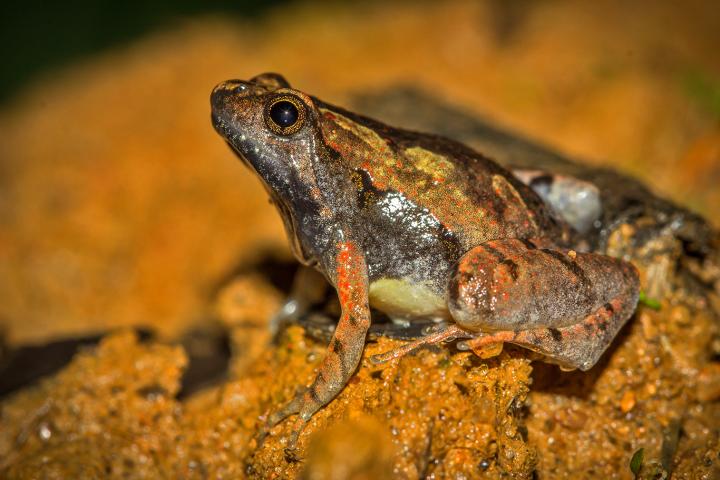 A previously unknown frog, no bigger than a thumbnail, has been discovered in the rocky wastelands on the West Coast of India. The new species, named Microhyla laterite, is the 39th addition to the genus Microhyla, and has already been categorised as endangered.

M. laterite was discovered accidently, by an independent researcher named Ramit Singal, who was conducting a survey in the Udupi District of India. Mr Ramit, along with a number of colleagues, recently published their discovery in the journal PLOS One.

The name ‘laterite’ comes from the rocky environment in which the frog was found. Laterite is a rock form rich in iron and aluminium. It dominates parts of India, forming desolate, tree-less landscapes. Consequently, the laterite areas of India’s coasts are referred to as wastelands.

Whilst a wasteland seems like an inhospitable environment, it is home to a number of species, including this newly named miniature frog, which inhabits damp ephemeral ponds and marshes when the summer monsoon season hits the West Coast of India.

M. laterite frogs can be distinguished from other similar species easily due to their size, with the adults growing no more than 1.6cm in length. They have smooth skin, that is pale brown in colour, with a dark purple throat and black distinct bands on their limbs. The species is also sexually dimorphic, meaning that there are physical differences between the males and females. The males are smaller, growing up to 16.6mm, whilst the females can reach 18.4mm in length. Interestingly, the vocalisations of the frog have been found to be incredibly similar to the calls of the ground crickets that share their habitat, perhaps allowing them to disguise themselves from prey.

According to the guidelines of the IUCN Red List, M. laterite will be classified as endangered. With a relatively narrow range of just 150 square kilometres, M. laterite may be at risk of extinction, unless its habitat can be protected.

Mr Ramit explains, “In spite of its geological heritage, laterite areas in India receive very little protection from any legislation. Given the threats these fragile habitats are facing, there is a strong imperative to conserve them”. Laterite is heavily mined for building material, and this could pose a problem to this new species of Microhyla frog.

The authors of the study are hoping to investigate the ecology of M. laterite further, to understand just how reliant it is on its rocky environment, and determine what needs to be done to save it from extinction.