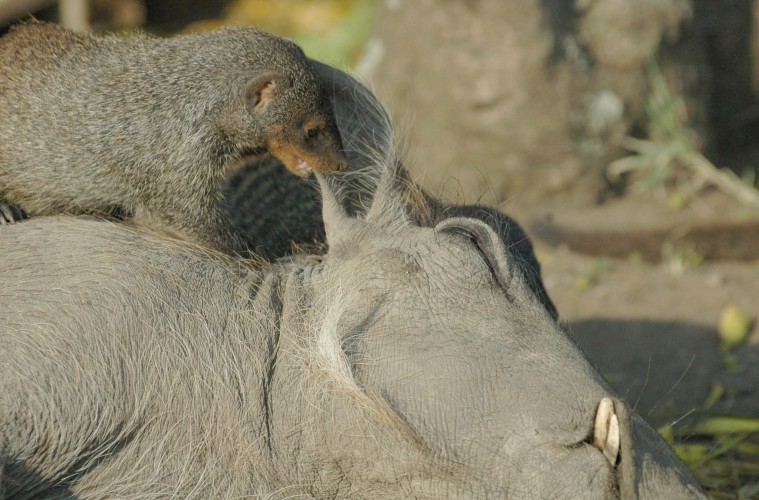 A banded mongoose tucks into a tick while the warthog relaxes. Credit: A. Plumptre

Warthogs living in Uganda have learned to rid themselves of annoying ticks by seeking out the grooming services of some accommodating neighbours: a group of mongooses looking for snacks.

Specifically, the warthogs of Queen Elizabeth National Park have learned to lie down in the presence of banded mongooses. In response, the mongoose cleaning crew have learned to inspect the wild pigs for ticks, going so far as to climb on top of their customers to gain access to more parasites.

A short article in the most recent edition of the journal Suiform Soundings describes the behaviour, which has been observed by tourists to the park and was featured in a BBC video, and encourages further research on it.

“Such partnerships between different mammal species are rare, and this particular interaction illustrates a great deal of trust between participants,” said Dr. Andy Plumptre, Director for WCS Albertine Rift Program and author of the published description of the behavior. “It makes you wonder what else may be happening between species that we don’t see because, in order to see it, both species need to be unafraid of people.”

The common warthog is widespread throughout sub-Saharan Africa and inhabits grasslands, savannas, and woodlands. The species can grow up to five feet in length and is characterized by a pair of tusks, which the warthog uses for both digging and defense. The banded mongoose is a small cat-like carnivore that, as its common name suggests, possesses a series of bands across its back. The species grows up to 1 ½ feet in length and travels in family groups numbering up to 40 individuals.

The warthog-mongoose encounter is a rare example of mammals exhibiting a symbiotic relationship called mutualism, where two animal species form a partnership with benefits for both groups. The warthogs get a cleaning and the mongooses get a meal. Other examples of mutualism include rhinos, zebras, and other animals that receive visits from parasite-eating birds called oxpeckers, and bees that feed on the nectar of flowers and deliver pollen to other plants.

“Wild pigs never fail to amaze me,” commented Dr. Erik Meijaard, Chair of the IUCN/SSC Wild Pigs Specialist Group. “Not many scientists are interested in studying the 18 species of wild pig, but behaviours like the one described here reiterate how uniquely adaptive, intelligent, and even cute wild pigs are. Pigs play important roles in ecosystem and their protection helps many other species.”

WCS is working to conserve the Queen Elizabeth National Park, one of the most biodiverse savanna parks in Africa, by supporting the Uganda Wildlife Authority improve its law enforcement and monitoring of the park. Unique animal behaviour, such as this mutualism between mongooses and warthogs, is just one of the special features of this site.

The above post is reprinted from materials provided by Wildlife Conservation Society.