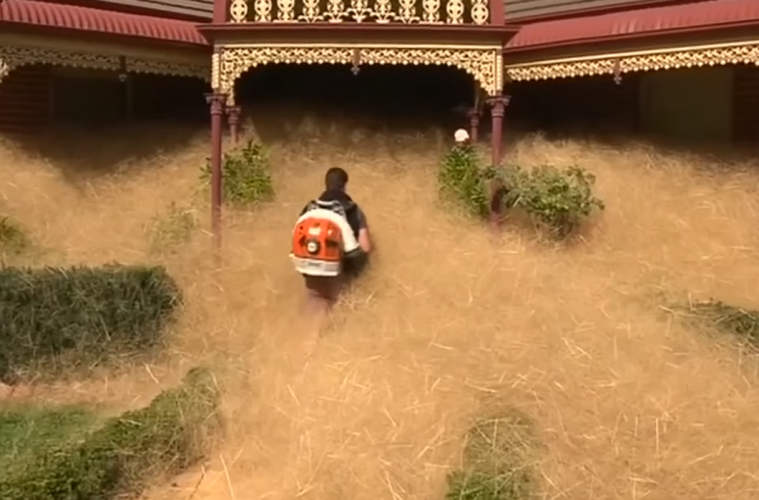 What is Australia’s ‘hairy panic’?

We’re used to stories of towns and cities waking up to floodwaters invading their homes. In complete contrast, the Australian city of Wangaratta, 230km north of Melbourne, is dealing with a hairy weed invasion that looks like a scene from the horror edit of an American Western film classic.

This “hairy panic”, known to scientists as Panicum effusum, is native to the area and is regularly found in pasture fields. It’s known to be weedy, meaning it grows fast and under the right conditions is able to form dense patches.

In this instance hairy panic found the ideal conditions to exploit its weedy nature: an extremely dry summer and a nearby farmer said to have left his fields unmanaged.

With little moisture in the air the stems and seed of the plant dry out and are easily picked up and carried along by the wind, moving faster and further under high wind conditions. Houses are perfect barriers to the spread of this plant, entrapping an ever-increasing wall of tumbleweed.

Invasion of the tumbleweeds?

Unlike the native hairy panic, the classic tumbleweed from Hollywood westerns is actually a non-native invasive species. This Russian thistle (Salsola tragus) arrived in the US after being shipped as as flax seed to South Dakota in the 1800s.

Native species can also be classed as invasive however, as the term generally applies to weedy species which bully out their neighbouring plants. Both plants produce lots of seeds and are blown around, so many of the same rules apply. Russian thistle is also tough to control in dry windy weather conditions.

However, unlike hairy panic, Russian thistle’s economic impact has been measured – it costs millions of dollars to keep highways free from pesky tumbleweeds, and the plant is know to harbour crop pests such as say’s stinkbug or the beet leafhopper which carries a virus that attacks vegetables.

There are no known human health risks associated with hairy panic grass, although residents in Wangaratta are definitely not welcoming the disruption to daily routines with open arms. There is concern over sheep and other livestock eating too much of the grass which may lead to a condition called “yellow big head”, causing blistering of the skin. Luckily by the time the plant dries up it is no longer toxic.

As hairy panic isn’t considered a fire risk, authorities are unable to assist in this instance – however annoyed locals may be. Perhaps legislation could be put in place for landowners to ensure efficient management of their pastures, particularly if their fields are near residential areas. The plant isn’t very tolerant of heavy grazing, but left to seed it grows rapidly. Grazing control may be considered as a management tool, although perhaps a contentious issue due to possible livestock disease.

Landowners are advised to wet pastures for times when dry conditions allow the weed to roll rampant through the streets. However in inland Australia during summer – hot and dry at the best times – “wetting pastures” is easier said than done.