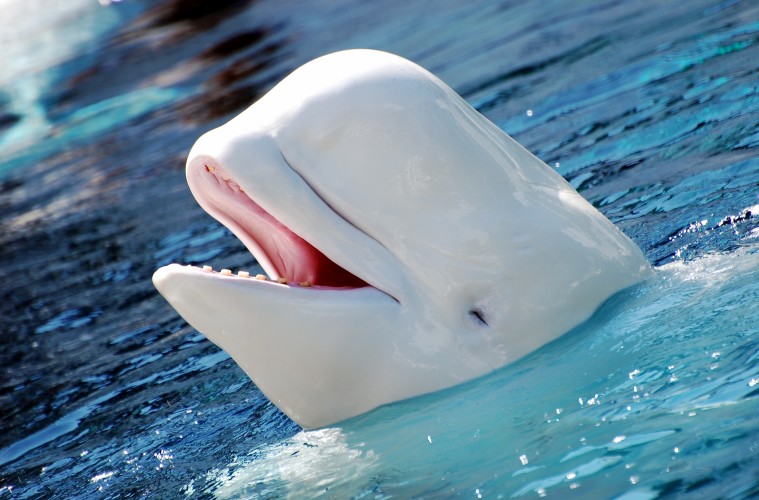 Why Belugas are forever blowing bubbles

Bubble blasts of different shapes may be indicative of a beluga whale’s mood.

An eight-year study has examined more than 11,000 bubbling events recorded over nearly 5,000 minutes of observation.

The deliberate expulsion of air underwater by a breath-holding animal seems counter-intuitive, “since the very lives of marine mammals depend on maintaining enough oxygen in their blood while underwater,” continues Elizabeth George, a member of the Canisius research team. “Therefore, the objective of our study was to determine the reason (or reasons) belugas blow bubbles.” The study first determined that nearly all beluga bubbles (97.2 percent) fall into one of four source-shape combinations: blowhole drips, blowhole bursts, blowhole streams and mouth rings. These bubbles are produced by male and female, juvenile and adult beluga whales (Delphinapterus leucas), and the study found that each bubble type is suggestive of a beluga’s mood.

Blowhole bursts are a manifestation of a beluga’s startle response. This bubble type is most commonly produced by adult females, “which suggests that adult females are more reactive by nature than adult males,” says Noonan. But the study also found that blowhole bursts are produced at a higher frequency by juvenile males than juvenile females and that, continues Noonan, “reflects a rowdier level of play bouts in younger males than females.”

In addition to the bubble-blowing moods of belugas, the Canisius study found that this species blows an average of 58 bubbles per minute. Overall, nearly 90 percent of all beluga bubbles originate from the blowhole; the remaining 10 percent are released through the whales’ mouths. Finally, concludes Noonan, “In working with these animals, we definitely found that there were ‘bubble days’ and non-bubble days.'”

It is possible, Noonan explains, that this is a consequence of extrinsic influences, since weather and other environmental variables are known to influence the behaviors of many whale species. However, since the pool conditions at the study site are largely stable, a social explanation for this day-to-day variation is also possible.

“A contagious effect, in which the bubbling of one beluga stimulates or at least facilitates a similar bubble release by another whale, could explain the occurrence of extremely high bubble days at frequencies greater than that predicted by chance.”

The above is based on materials provided by Canisius College.