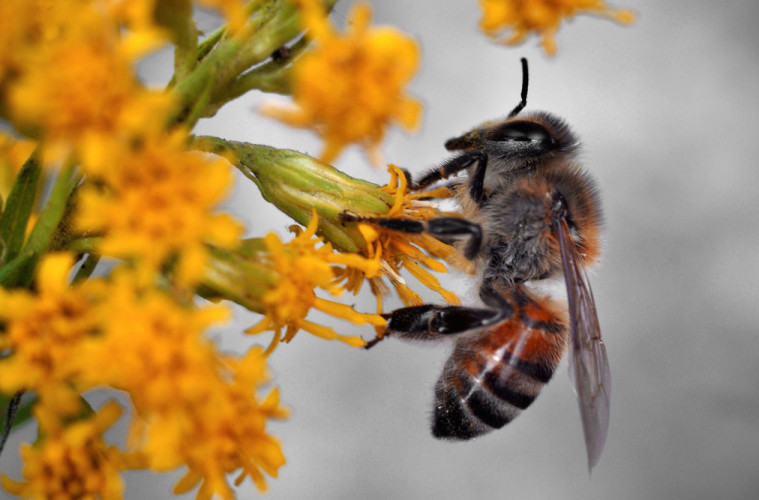 Why are scientists putting backpacks on bees?

An exciting attempt to help honey bees has come about thanks to an unlikely intellectual marriage. One of us is an ecologist who wants to keep an eye on individual bees over their entire two to three-mile range and monitor their behaviour. The other is an expert in micro-electronics. Together, we want to develop miniature bee “backpacks” that will power tracking devices by harvesting the energy honey bees generate while flying and visiting flowers.

Bumble and honey bees, along with butterflies, moths and hoverflies perform much of the pollination that is essential for us to grow food. Unfortunately, since World War II, these insects have seen dramatic global population declines – numbers of some British bumblebees are down as much as 70%.

There are lots of reasons for this drastic decline, including habitat loss – as meadows and wildflowers are destroyed to make way for farmland and buildings – invasive species such as the varroa mite and Asian Hornet, which preys on bees, disease and pesticide use. More intensive agricultural methods also leave little room for flowering plants.

We’d like to know more about this decline, of course, but the main problem confronting researchers is that bees are very small and difficult to follow as they go about their business. This presents a substantial challenge to tracking their movements and quantifying the major causes and effects of population declines.

Current studies tend to count the number of bees that do not return to a hive as lost or dead, for example. And any attempt to determine a cause of death is lost in the wider environment as we don’t know where the missing bees end up.

Knowing where, how and when they died or became lost is essential to improving our understanding of the impact of pesticides on non-target organisms and ultimately to how we control the use of such chemicals. These challenges have spurred efforts to better understand both how bees navigate their way around the countryside, and what determines their ultimate fate.

Monitoring bee movements for any length of time and over large distances is extremely difficult. The transmitters used to track bees either weigh more than the bee, or have a range of only a few metres. Consequently, the devices either affect their behaviour (if they are too heavy) or provide insufficient data (if underpowered).

Most bee monitoring occurs in carefully-controlled experimental conditions on relatively flat land. Current tracking systems are unable to monitor in landscapes that are anything other than flat as there needs to be a clear line of sight between the receiver and the transmitter attached to the bee. Knowing where and how bees move and die outside the hive in a variety of landscapes will provide critical information in evaluating the impact of modern agricultural techniques such as the use of neonicotinoid pesticides.

What we need to do

Three major challenges need to be overcome for tracking devices to become truly useful: their weight, range, and how long their power source lasts. We’re aiming to reduce the transmitter weight by harvesting the energy the bee generates while flying. This will allow us to do away with the battery, which is normally the heaviest component. The final bee backpack will weigh less than 50 milligrams (about two grains of rice) and will be the size of a match head.

To further reduce the need for a high-powered signal (which requires more energy to be emitted from the transmitter) we intend to use a mobile receiver to track and follow the bee’s movements over its entire foraging range. This will remove the need for heavy, cumbersome equipment and will allow monitoring in a greater range of “real life” environments.

For the little bee, the new device will feel like a rucksack – not the equivalent of a kitchen table and chairs, as at present.

The same technology could also be used against Asian hornets, which prey on honey bees, can destroy an entire colony in just a few hours, and represent a significant global threat to bees. We could attach a bee transmitter to a captured hornet, track it back to its nest and destroy the colony in early summer, before they have the chance to produce new queens.

The devices could also help estimate tropical deforestation rates based on the insects’ visits to flowering trees, or quantify the number of flowers in threatened meadows. They could also be used to calculate the value of pollination services to agriculture and horticulture. There’s certainly a future for bee backpacks.