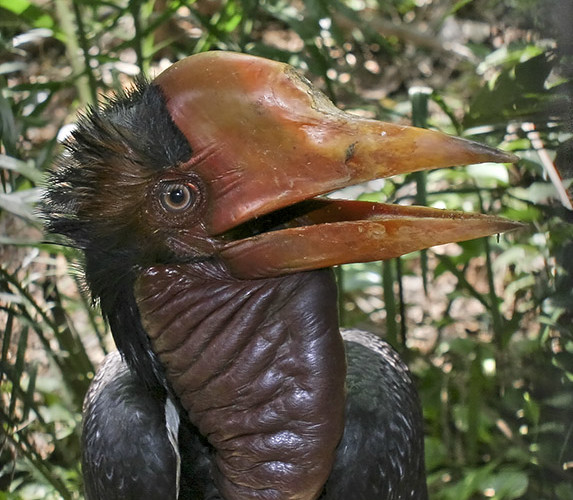 Helmeted hornbills and the demand for ‘avian ivory’

One of the most expensive and sought after animals on the wildlife black market is still under the radar – the helmeted hornbill (Rhinoplax vigil) of South-East Asia. The devastating and growing illegal trade in the beak or “casque” of this bird is driving it to the brink. The trade was responsible for the recent reclassification of this spectacular species, skipping two whole categories from “near threatened” to “critically endangered”.

Run largely by organised criminal groups, the trade is mainly centred in Indonesia, which is also the area where one of the largest populations of the helmeted hornbill and the largest area of its habitat is located.

They’re big – about the size of a small bald eagle.
artvintage1800s.etsy.com

The hornbill’s casque has many names, including “golden ivory” or “golden jade” because it is similar to elephant ivory, and can be carved in a similar fashion. The casque is made of the protein keratin, the same key component as your hair and nails or a rhino’s horn. Online it is referred to as “red ivory”, alongside code-words like “white” for elephant ivory and “black” for rhino horns, all three of which are monitored by the Environmental Investigation Agency.

The helmeted hornbill is unique because its casque is not completely hollow or spongy like other hornbills; in fact, the upper part is solid, and has been adapted for aerial jousting.

This bird has a long history of being hunted by humans. Traditionally, the casque is harvested in low numbers for tribal medicine, for instance by the Orang Asli people in Malaysia where it is carved into rings and used to detect poison.

These days, by far the largest demand comes from China, where hornbill ivory can fetch up to five times as much as true ivory on the black market, costing around US$4-8 per gram, or up to US$1,000 for a single casque. Dating back to the Ming dynasty, the Chinese have used hornbill ivory to make decorative carvings and beads, which serve as luxury products to display wealth. It is also ground up and sold for traditional medicine. There is also a smaller trade in hornbill feathers, adding to the pressure on the species.

Helmeted hornbills mostly eat fruit, especially figs. They are an important seed disperser across South-East Asia’s lowland tropical forests, which are under heavy pressure from deforestation. So in addition to hunting, this hornbill may be losing important nesting sites and food sources. It is also particularly vulnerable as it has a relatively low reproductive rate of around one chick a year.

The red ivory trade is not new, but it has been becoming increasingly widespread over the years. Exact numbers are hard to come by but back in 2013, hornbill expert Yokyok Hadiprakarsa, found that around 500 birds were killed each month in one Indonesian province alone. As demand rises for alternatives to elephant ivory for vanity products, competition for hunters to find these increasingly scarce birds also rises – there was even a report of hunters using an AK-47 assault rifle rented from local police officers to catch the birds.

Dealers can buy each beak from local hunters for US$4 and sell them on for US$1,000.
Wildlife Conservation Society

Although the trade centres around Indonesia, as populations of hornbills decrease, the fear is that this is likely to shift to other areas where the hornbill can still be found, such as Malaysia or peninsula Thailand. This is a task for researchers who will have to identify the most important populations of this species for conservation efforts, as well as the extent of the trade and hunting hotspots. Reducing the demand for luxury hornbill products would be a logical next step, in addition to further law enforcement to stop hunters, and remove red ivory products from the market.

Meanwhile, in the forests of South-East Asia, Hadiprakarsa and his team continue their work. Let’s hope the helmeted hornbill’s next classification is not “extinct”.