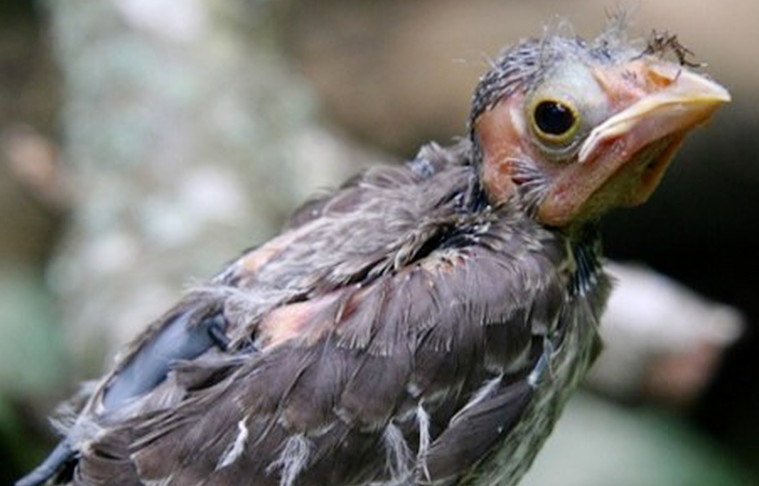 Juvenile cowbirds sneak out at night

A new study explores how a young cowbird, left as an egg in the nest of a different species, grows up to know it’s a cowbird and not a warbler, thrush or sparrow.

The study, published in Animal Behaviour, reveals that cowbird juveniles leave the host parents at dusk and spend their nights in nearby fields, returning just after daybreak. This behavior likely plays a role in the cowbirds’ ability to avoid imprinting on their host parents.

“If I took a chickadee and I put it in a titmouse nest, the chickadee would start learning the song of the titmouse and it would actually learn the titmouse behaviors,” said Matthew Louder, who conducted the study as a Ph.D. student with Illinois Natural History Survey avian ecologist Jeff Hoover and INHS biological surveys coordinator Wendy Schelsky. “And then, when it was old enough, the chickadee would prefer to mate with the titmouse, which would be an evolutionary dead end,” he said.

Louder is now a postdoctoral researcher with East Carolina University in North Carolina and Hunter College in New York.

The imprinting process is widespread among birds and other animals, but brood parasites like the cowbird appear to be resistant to imprinting. They will imprint on a different species if confined with that species for an extended period of time in a cage, but the birds don’t appear to do so in the wild.

Cowbird hosts, such as the prothonotary warblers in this study, have their own habits and habitats, and seldom choose to live where the cowbirds live or eat what they eat. Prothonotary warblers, for example, live in forests and dine on insects and caterpillars. Cowbirds spend most of their adult lives in open fields and prairies, and while they do eat insects, about three-quarters of their diet consists of seeds.

“Among other things, cowbirds have got to learn to eat like cowbirds or they’re not going to survive very long,” Hoover said.

The researchers wanted to test the hypothesis that cowbird moms are the ones that lead their offspring out of the forest. There was some support for this idea. A recent study from the same team found that cowbird females don’t simply abandon their eggs in another species’ nest. They pay attention to whether the young birds survive, sometimes wrecking the nests of birds that kick the cowbird eggs out of their nests.

The cowbird females also return to nests where young cowbirds survived to fledging age. Cowbird females are often spotted in the vicinity of cowbird nestlings, Schelsky said, and sometimes respond (with vocalizations, not food) to the nestlings’ begging calls.

To track the birds in the forest and prairie, the researchers put radio telemetry transmitters on the cowbird nestlings and on adult female cowbirds in the forest where the host parents made their nests. The team took blood from the birds and conducted genetic analyses to match the juveniles (and their radio signals) to their biological mothers.

But tracking the birds, even with the radio transmitters, was next to impossible, Louder said. He tried for a year, but was unable to get meaningful data. Then study co-author Michael Ward, a professor of natural resources and environmental sciences at the University of Illinois, came up with a new approach.

“He helped construct an automated telemetry system,” Louder said. “We put up three radio towers, each with six antennas on it, so you have 360-degree directional coverage. All three towers track one individual cowbird at a time and then move to the next individual.”

With this system, Louder could track the location of each study bird every one-to-two minutes.

“We were able to watch the juveniles and see if they left the forest at the same time as a female and, if so, whether that female was their mom,” he said.

“Strangely enough, the juveniles did not follow the females out of the forest,” Louder said. Instead, they left on their own, after dark, returning only the following morning, he said.

“I started seeing this in the data and I thought it was wrong,” Louder said. So he went to the forest and followed a single juvenile cowbird for one night. The bird left the forest in the evening, moving to a rosebush on the adjacent prairie. It was out there all night, alone.

“As soon as the sun came up, the juvenile flew back into the forest and to the warbler’s territory,” Louder said. “Without the automated radio telemetry, I would have assumed that it had stayed in the forest all night.”

The discovery doesn’t explain how cowbirds find their way into a cowbird flock, where they learn most of their social and survival skills and eventually find a mate. But it does offer some insight into the processes that allow young cowbirds to avoid imprinting on their hosts, the researchers said.

“Clearly, there’s a lot more to these birds than people would have thought,” Hoover said. “We still have more layers to peel away from this onion that is the cowbird.”

Based on materials provided by University of Illinois