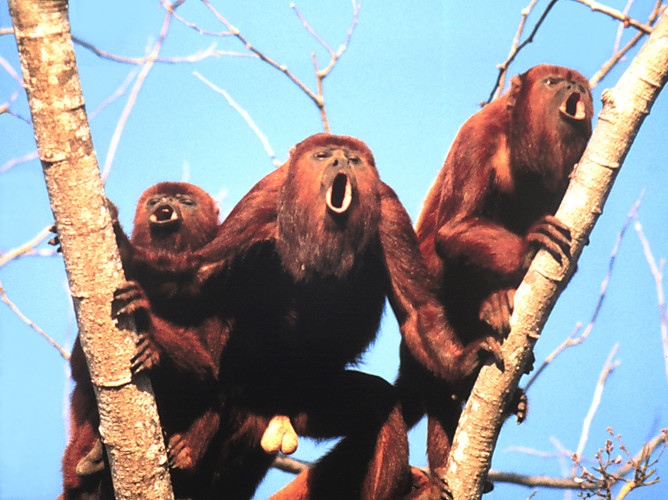 Howler monkeys are either all mouth, or all trousers

Deep calls or big balls? Howler monkeys are either all mouth, or all trousers

Do you walk the walk, or just talk the talk? Can you put your money where your mouth is, or are you all mouth and no trousers? According to a new study it seems that it’s mouth or trousers – we can’t have both.

In the animal kingdom evolution often provides males with beefy bodies, sexual weaponry such as big teeth, horns or antlers, or bold colours in order to attract a female’s attention and out-compete rivals. But as females often mate with multiple partners, males also need to generate numerous fast and healthy sperm to ensure that they are the most likely to sire offspring. So males are left facing competing demands, between finding a mate and fertilising eggs.

The problem is that these traits are costly, so males may be unable to invest in both.

There is evidence to suggest that species do face these “trade-offs” over reproduction, where it’s impossible to improve one trait without detracting from another. For example, in humans it’s thought that there may be a trade-off between growth and reproduction in women. Women who go through puberty earlier, or have children at an earlier age, are shorter as adults.

Similarly men may face a trade-off between investing in reproduction or resisting diseases. Those with higher levels of testosterone have been shown to have weaker immune responses. The same trade-off between investment in either bigger bodies and sexual weaponry or bigger testes and genitals is found in other animals, such as seals and sea lions, dolphins and whales, and many other birds, primates, ungulates and even insects.

In a new study, published in Current Biology, we were interested in examining this evolutionary trade–off in howler monkeys. These monkeys, of which there are ten species distributed from Mexico to Argentina, live in a wide range of habitats and show big differences in social organisation.

Howler monkeys are among the loudest animals on the planet, yet they weigh just 7kg – about the size of a small dog, and lighter than a big Christmas turkey. They produce powerful, low frequency calls using a highly modified larynx, with extremely long vocal folds and a greatly enlarged cup-shaped hyoid bone. In most animals the hyoid is a very small, horseshoe-shaped bone that sits in the neck above the larynx and supports the tongue, but in howler monkeys it has evolved to become a large resonating chamber to amplify their roars. These evolutionary adaptations allow howler monkeys to produce extremely loud and incredibly low-frequency calls like those produced by animals ten times their size.

Remarkably, there is a huge amount of variation in the size of the hyoid bone among the howler monkeys species. Our new research aimed to try and describe this variation quantitatively, as well as understand both the evolutionary pressures that led to the observed variation, and the acoustic consequences of having large versus small hyoids.

We found that among males, hyoid volume varied widely among species – in fact the largest hyoid was 14 times the size of the smallest. We also found a large amount of variation in the size of the testes among species, with the largest testes 6.5 times bigger than the smallest. Overall, species living in small groups in which there tends to be just one male tended to have extremely large hyoids and very small testes. Those living in large groups, with many competing males, tended to have very small hyoids and very large testes. So it seems that males either invest in one reproductive trait or the other, but not both.

We studied the acoustics of the howler monkey’s roars and found those with larger hyoids produced lower frequency roars that made them seem much bigger than they really are. Presumably this is important in those species where it’s common for a single male to reign over a harem of females, and needs to scare off rivals. In species where there are many males living in mixed groups there is perhaps less need for such vociferousness, but on the other hand the males need to produce more and faster sperm.

This is the first known example of a trade-off between investing in vocalising and increased sperm production, which opens the door to many other potential studies on the trade-offs between sexually-selected traits. It’s hard to say exactly how the trade-off works. Developing a large vocal organ and roaring may be so costly that there is simply not enough energy left to invest in testes. Alternatively, such a roar may be so effective at deterring rival males that there’s no need for capacious, hard-working testes to generate large amounts of quality sperm.

So it seems that, in howler monkeys at least, males are either all mouth and no trousers, or all trousers and no mouth. When it comes to sex and reproduction, evolution says you can’t have it all. 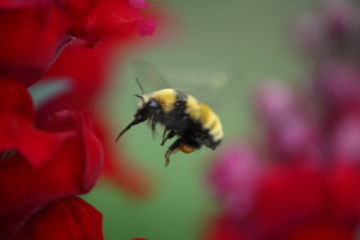