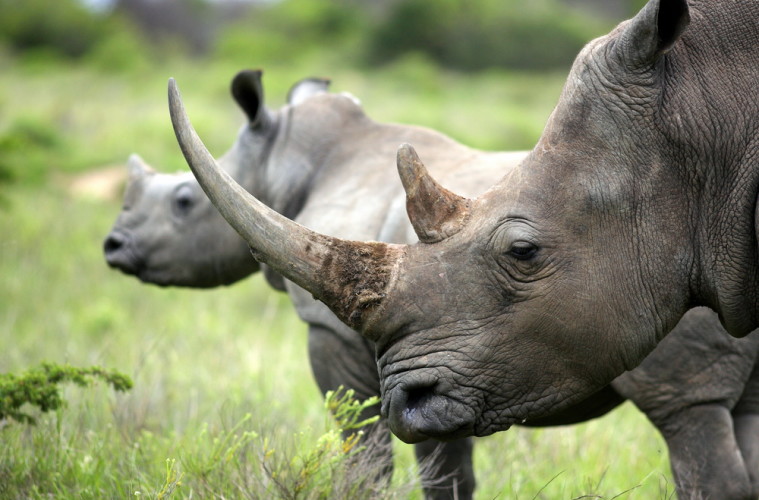 The war on wildlife crime is taking a new technology-driven direction. Rhinos are being fitted with GPS trackers, heart rate monitors and spy cameras – all embedded within their horns. These small but high-tech devices could be a game changer for anti-poaching efforts in Africa.

That’s the claim of conservation group We Are Protect, whose Real-time Anti Poaching Intelligence Devices (RAPID) have completed proof-of-concept trials on black rhinos in South Africa. The project now aims to move forward to field testing.

Here’s how it works. The unit is fitted within the horn of a wild rhino – a painless operation as their horns are made of keratin, just like human nails or hair – and data is then relayed live to a centralised control centre which could be many miles away.

If the animal’s heart rate suddenly becomes heightened or declines, this triggers immediate analysis of the in-horn camera footage (at HQ) while an armed anti-poaching team scrambles on a rapid response mission to intercept the poachers at the location provided.

Anti-poaching is a dangerous job – these rangers have their faces obscured for security reasons.
Protect RAPID

Technology for prevention, not just punishment

The original impetus for RAPID came from the inability of teams on the ground to detect poaching quickly and effectively enough to catch the poachers and prevent the horn reaching the illegal markets. However, the reality is that we want to stop poaching happening in the first place. We want to save the rhino, not just its horn.

To achieve this goal RAPID should operate as a deterrent, not just an arrest mechanism. This has raised the question of whether RAPID-tagged rhinos should ‘“advertise” that they are carrying the device. But that could simply drive poachers to target untagged rhino.

So, in order to achieve the aim of the project, to render poaching a “pointless exercise”, we need all individual rhinos to be fitted with RAPID and tagged to indicate so. That sounds expensive and it is not clear who would foot the bill.

Every rhino needs a tracker

Footage giving us a rhino’s eye (or rather a rhino horn’s) view of the world is fascinating and should attract support. However, advanced publicity for this anti-poaching game changer may encourage poachers into a frenzy of killings before it is widely adopted. One South African game reserve saw a similar killing spree shortly before some of its rhinos were due to be dehorned.

Let’s hope that the project receives sufficient financial backing to facilitate a comprehensive and speedy roll-out on the ground. If that is the case, then RAPID could be a really progressive step in the continuing war against wildlife crime.

We badly need a practical and positive development. Despite growing concern, and increasingly desperate conservation actions, poaching continues to increase and rhino populations continue to decline, year-on-year. South Africa, which houses the core global populations of white and black rhinoceros, has already lost 749 rhinos to poaching this year, on course to match last year’s record 1,215 (itself a 9,000-fold increase from 2007).

Dead on its feet

Meanwhile, the remnant population of the northern white rhino continues its sad and apparently inevitable decline to extinction. It has dropped to a genetic cliff-edge with the recent death of Nabire meaning only four geriatric individuals survive in the world.

The northern white rhino may be dead on its feet, but RAPID offers hope for other species. The We Are Protect team is already looking beyond rhino, and aims to expand the use of RAPID to other endangered creatures under attack from poachers, including elephants and tigers.

We need to throw everything we have, from all angles, at wildlife crime. If we cannot save iconic species like rhinos, elephants, and tigers it does not bode well for the less celebrated animals out there that are also suffering.