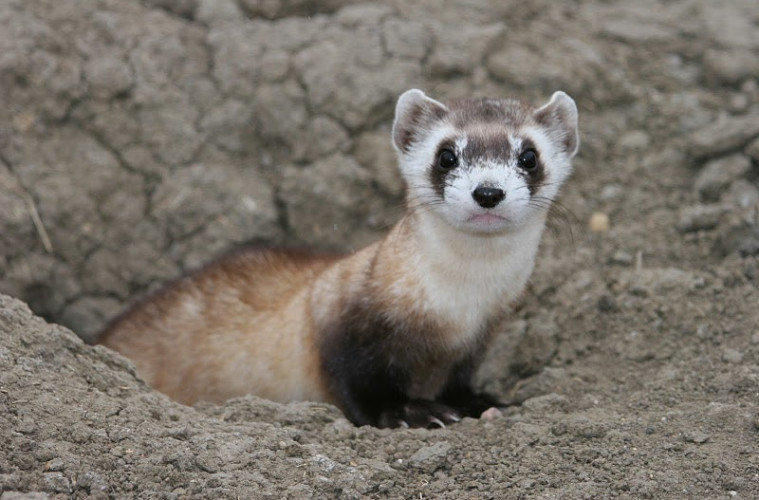 Black-footed ferrets, a critically endangered species native to North America, have renewed hope for future survival thanks to successful efforts by a coalition of conservationists, including scientists at Lincoln Park Zoo, to reproduce genetically important offspring using frozen semen from a ferret who has been dead for approximately 20 years. The sire, “Scarface,” as he is affectionately called by the team, was one of the last 18 black-footed ferrets to exist in the world in the 1980s. Eight kits, including offspring of Scarface, were born recently, significantly increasing the gene diversity of this endangered population that a dedicated team is working to recover in the wild.

“Our study is the first to provide empirical evidence that artificial insemination with long-stored spermatozoa is not only possible but also beneficial to the genetic diversity of an endangered species,” said David Wildt, lead author, senior scientist and head of the Center for Species Survival at SCBI. “What we’ve done here with the black-footed ferret is an excellent example of how sperm preservation can benefit species recovery programs.” The U.S. Fish and Wildlife Service developed and oversee the Black-Footed Ferret Recovery Program. The Association of Zoos and Aquariums’ Species Survival Plan manages the black-footed ferret breeding program at ex situ facilities, the breeding population in which is comprised of approximately 300 animals.

“The entire species survival depends on successful captive management to ensure healthy genetics over the next 100 years and to produce individuals for the reintroduction program,” explained Black-Footed Ferret Reproduction Advisor Rachel Santymire, PhD, director of the Davee Center for Endocrinology and Epidemiology at Lincoln Park Zoo. “To balance out these demands on the breeding program, we have to ensure that each individual ferret passes its genes on to the next generation.”

Over the past several years, the team has been developing assisted reproductive technology like artificial insemination and semen cryopreservation. For this study, all of the males were managed either at SCBI or at the USFWS National Black-Footed Ferret Conservation Center. Scientists collected semen samples from adult black-footed ferrets that ranged in age from one to six years old. All females were managed at SCBI.

Initially, scientists used fresh semen to artificially inseminate females who failed to naturally mate with males, resulting in 135 kits. With just a few founders to rebuild an entire species, early managers of the black-footed ferret recovery program knew that genetic diversity would be lost. Loss of genetic variation can lead to increased sperm malformation and lower success of pregnancy over time. Researchers, led by Santymire, routinely collected and preserved black-footed ferret semen for later use as part of standard operating procedures.

During the 2008 breeding season, SCBI scientists used semen samples from four male black-footed ferrets donors that had been frozen for 10 years. Black-footed ferret Population Advisor Colleen Lynch of Riverbanks Zoo and Garden conducted population genetic analysis to select pairings of deceased sperm donors with living females based on several genetic metrics including mean kinship of the parents and inbreeding coefficients of potential offspring to maximize the genetic benefit of successful pairings. In the years that followed, subsequent AIs incorporated semen that had been cryopreserved up to 20 years, also resulting in successful pregnancies.

“Our findings show how important it is to bank sperm and other biomaterials from rare and endangered animal species over time,” said Paul Marinari, senior curator at the Smithsonian Conservation Biology Institute. “These ‘snapshots’ of biodiversity could be invaluable to future animal conservation efforts, which is why we must make every effort to collect, store and study these materials now.”