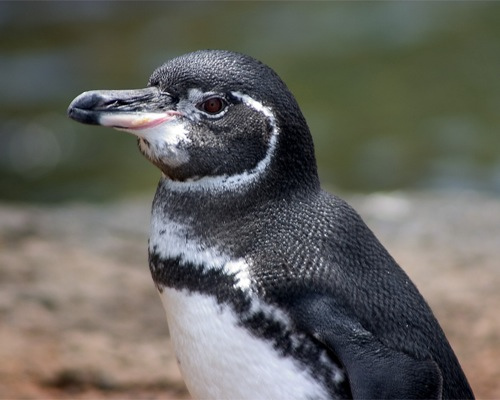 Roz EvansAugust 11, 2015
0
Shifts in trade winds and ocean currents powered a resurgence of endangered Galápagos penguins over the past 30 years, according to a new study. These changes enlarged a cold pool of water the penguins rely on for food and breeding — an expansion that could continue as the climate changes over the coming decades, the study’s authors said.

The Galápagos Islands, a chain of islands 1,000 kilometers (600 miles) west of mainland Ecuador, are home to the only penguins in the Northern Hemisphere. The 48-centimeter (19-inch) tall black and white Galápagos penguins landed on the endangered species list in 2000 after the population plummeted to only a few hundred individuals and are now considered the rarest penguins in the world.

The Galápagos penguin population tenuously hangs onto the islands that so enthralled Charles Darwin during his visit in 1835. The penguins once numbered around 2,000 individuals, but in the early 1980s a strong El Niño — a time when sea surface temperatures in the tropical Pacific are unusually warm — brought their numbers down to less than 500 birds. Dogs, cats and rats introduced to the islands also stymied the penguin population by attacking the birds, disturbing their nests, and introducing new diseases, according to previous research.

Despite these setbacks, the penguins gradually increased in number in the following decades, according to local bird counts. Researchers, interested by the increase in penguins, noted that the birds remained near the coldest stretches of water. Nearly all of the Galápagos penguins live on the western coasts of Isabela and Fernandina, and two-thirds of them huddled near the coldest waters at the southern tips of the islands, according to previous research.

The study’s authors wanted to know whether the growing numbers of penguins were related to local changes in ocean temperature. They combined previously-collected penguin population data from 1982 to 2014 with sea surface temperature data from satellites, ships and buoys for the same time period.

They found that the cold pool, where sea surface temperatures are below 22 degrees Celsius (71 degrees Fahrenheit), expanded 35 kilometers (22 miles) farther north than where it was located at the beginning of the study period. In the 1980s the cold water pocket reached only the southern halves of the western coasts of Isabela and Fernandina. By 2014, the cold water pocket extended across the entire western coasts of the islands.

Likely due to a combination of natural variation and human-caused climate change, trade winds west of the Galápagos slackened during the study period, lessening the pressure pushing the Equatorial Undercurrent south, according to the new study. Consequently, the ocean current gradually shifted north, increasing the amount of cold water coming to the Galápagos Islands, according to the study’s authors.

Satellite images showed that this expanded pool of cold water likely encouraged the growth of phytoplankton, according to the new study. This increase in ocean algae attracted fish to the area — the main entrée for Galápagos penguins, suggest the authors. The largest pulses of cold water reached the islands from July through December, coinciding with the penguins’ breeding season. The bountiful fish helped the birds successfully reproduce and feed their young, according to the new study.

Models indicate trade winds will continue to abate in the future as the climate warms, Karnauskas said. This could cause the undercurrent to continue to move north, expanding the Galápagos cold pool and possibly further raising penguin populations, he said. Other animal populations like the endangered Galápagos fur seal and the marine iguana also may profit from the prolific amount of food in the Galápagos cold pool, according to the study’s authors.

Wind and ocean currents could also possibly return to where they were in the 1980s, compressing the cold pool and possibly leading to a decline in penguins, Karnauskas added.

The new study shows how large-scale changes in the climate can act locally, said Michelle L’Heureux, a climate scientist with the National Oceanic and Atmospheric Administration’s Climate Prediction Center in College Park, Maryland, and not an author on the new paper.

“While it is important that we focus on the big picture with climate change, it’s really the small scale that matters to the animals and plants that are impacted,” she said.

The above post is reprinted from materials provided by American Geophysical Union.

The American Geophysical Union is dedicated to advancing the Earth and space sciences for the benefit of humanity through its scholarly publications, conferences, and outreach programs. AGU is a not-for-profit, professional, scientific organization representing more than 60,000 members in 139 countries. Join the conversation on Facebook, Twitter, YouTube, and our other social media channels.