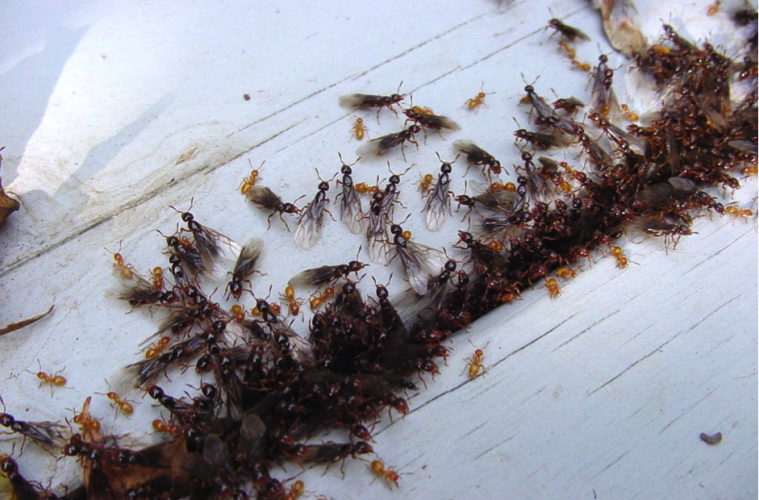 As we reach the height of summer in the northern hemisphere, people in the UK have found their barbeque parties and sunbathing spots have been invaded by masses of flying ants. Over the past few days these swarms of ants have been invading towns and cities all across the UK and many people have turned to social media confused as to why so many winged ants have appeared all at once.

What are these flying ant things everywhere omg ????

There’s nothing to be afraid of. The appearance of large numbers of flying ants marks the brief annual mating season during the summer months. So prolific is their appearance that the day they emerge has been dubbed ‘flying ant day’. The winged ants are the young queen ants (usually the largest of the ants) as well as the reproductive males, who emerge from below ground to search for a partner so the young queens can start a new colony.

In early summer, ant colonies start to produce the winged reproductive males and females who receive greater nourishment than the normal worker ants. When conditions are right, they emerge from the colony to mate. Mating flights, also known as nuptial flights, are synchronised across different colonies using weather conditions as environmental cues. At the right time of year, when temperatures are high enough, wind speed is low and there is little chance of rain, the ants will begin to emerge. This simultaneous mating makes finding a mate easier, and also means the individuals are less vulnerable to predators, the sheer number of ants all mating at once decreases the individual chance of being picked off.

When you see a group of flying ants, they aren’t necessarily the appearance of one colony. Ants will disperse and often fly a significant distance away from their own colony to minimise inbreeding. Females will assess their male suitors during the nuptial flight, to allow her to select a male with good genes. Once the decision is made, they mate in the air. For males, their story is a short one – they die fairly soon after mating. Females will come to the ground where they lose their wings and are able to start a new colony. A black garden ant queen can survive up to 15 years and can produce colonies of up to 40,000 individuals.

With so many winged ants you would think that we would be completely overrun with their colonies by now. However, very few queen ants actually begin their own colony. The loss of their wings makes the new queens an easy target to predatory birds. So in actual fact, of the millions of ants that emerge to reproduce, only a small proportion of these will be successful.

Whilst the phenomenon is dubbed ‘flying ant day’, this is a little misleading. The Society of Biology studied the emergence of these ants and suggested that the matings are likely to occur over a number of weeks. Recent reports suggest that the period in London could last for up to a month!

Crazy how just 1 flying ant started #FlyingAntDay then all the flying ants saw it on their Twitter feed & took to the streets. #SocialMedia

Professor Adam hart of the University of Gloucestershire studies ant mating behaviour and has, for the past few years, organised citizen science surveys to monitor ant mating flight. His results are due to be posted this year.
http://insight.glos.ac.uk/academicschools/nss/staffprofiles/Pages/AdamHart.aspx