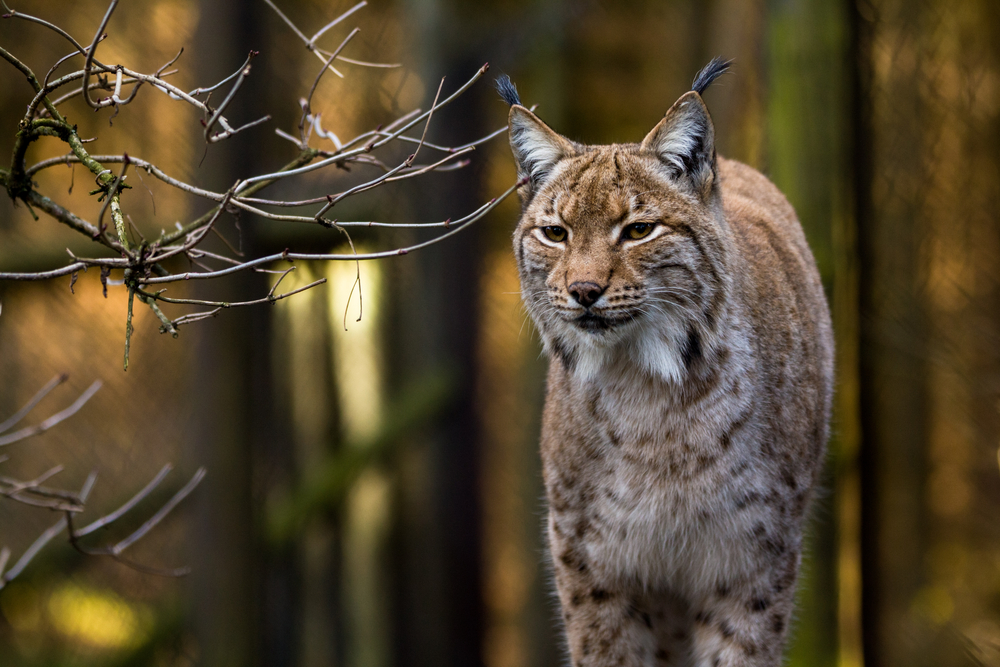 While living on the edge of a forest leads to a higher mortality in Eurasian lynx, economic growth in post-communist Poland may have also led to an unexpected respite for this enigmatic predator.

A recently published study by the Polish Academy of Sciences, covering a period of 20 years, investigated the influence of economic growth and the ‘edge’ effect on Eurasian lynx (Lynx lynx) mortality in the Białowieża Primeval Forest in north-eastern Poland.

The Białowieża forest is one of the last remaining fragments of primary forest that once swathed most of Europe. It’s an incredibly biodiverse habitat, and its status, since 1979, as a UNESCO world heritage site reflects that. The 141,885 hectare, trans-boundary forest, which straddles the border of Poland and Belarus, has been conserved thanks to several stages of protection. The forest is home to some 59 mammal species, around 250 bird species, 13 amphibian species, 7 species of reptile and over 12,000 species of invertebrate.

Its diversity can be partly attributed to the natural processes allowed to occur within the forest. Dead wood, from both standing and fallen trees is home to a plethora of invertebrate and fungi life. The area is particularly famous for being home of the largest population of the iconic European bison, and is home to an isolated population of the enigmatic Eurasian lynx.

Despite the benefits of protected status and being home to exceptional diversity, the forest has not seen an increase in Eurasian lynx numbers. In fact, between the years 1980 and 2001 there was a population decline, from which the species is yet to recover.

Considering the Eurasian lynx was afforded official protection in 1995, this is a puzzle, and one that is further confounded when compared with Scandinavian and Baltic states such as Norway and Sweden: in these countries, despite active hunting and culling operations, numbers of Eurasian lynx are steadily on the rise.

Recent studies have indicated that fragmented habitats have a negative impact on Eurasian lynx genetic diversity. Even when individuals are closely situated, it has been found that the populations are isolated and thus poorly connected through contemporary gene flow.

With an increase in habitat fragmentation there is a pronounced increase in the edge effect – an increase in mortality as a result of living on the boundaries of a habitat. Previously, studies in Scandinavia have revealed that anthropogenic factors, such as poaching, culling and vehicle collisions, are the chief mortality causes for the Eurasian lynx living in such vulnerable outer areas.

The long-term study to investigate the edge effect and the influence of Poland’s new found affluence on Eurasian lynx populations revealed some fascinating results that could have further implications when considering conservation actions.

Surprisingly, and in contrast to the common assumption, the report showed that lynx mortality was higher during a low growth economic phase between 1991-1996, than in a high growth phase between 2004-2011. The report suggested that this could be linked to the observed decrease in poaching since the fall of communism in Poland over 20 years ago.

Rural areas, such as the villages around Białowieża, were subject to extreme poverty. Peasants would poach ungulates using traps and snares in which carnivores such as Eurasian lynx could occasionally become fatally trapped. The poaching of ungulates possibly also had a negative effect on carnivore numbers by way of reducing their food source or by forcing it to disperse.

The researchers conclude that the major factor affecting the population size of the Eurasian lynx in the Białowieża Primeval forest is habitat fragmentation. This conclusion is reinforced by the study revealing that human-induced lynx mortality was higher in areas between patches of forest occupied by the lynx.

The Eurasian lynx is not alone in feeling the edge effect: it has also been related to an increase in accidental and deliberate human-induced mortality for other species of charismatic carnivores including leopards, lions, badgers and the Iberian lynx. Habitat fragmentation limits dispersal and gene flow amongst populations, further hampering population increase and expansion.

The results of this study strongly emphasise that to offer improved conservation, and hopefully an increase in numbers, there has to be a fundamental requirement to restore habitat connectivity by the provision of ecological or ‘green’ corridors.

For regular great stories within a beautiful magazine, subscribe to Biosphere for just £20 a year here.