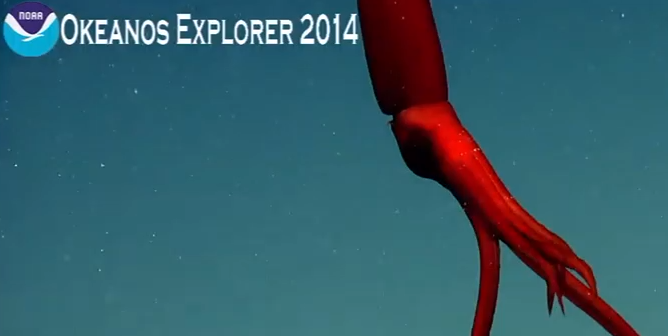 At over two miles below the surface of the Atlantic Ocean, a remotely-operated vehicle (ROV) glides just above the seabed. Outside the small pool of light surrounding it, there appears to be only darkness. No natural light reaches here; it is the ROV that lights up the darkness, revealing muddy substrate and jutting rock formations, pale echinoderms and coral-covered slopes. Even at these dark and crushing depths, the oceans are full of life.

The ROV, Deep Discoverer, belongs to the Okeanos Explorer – the National Oceanic and Atmospheric Administration’s specialist exploration vessel. Its mission is to boldly explore the largely unknown canyons and seamounts of the western Atlantic, providing baseline knowledge of the ecosystems found there.

Between September 4 and October 7, 2014, the Explorer will visit a number of submarine canyons – features that link the abyssal plain to the upper continental shelf, and volcanic peaks along the New England seamount chain. Alongside the exploration will be the collection of data invaluable in expanding knowledge of deep-sea ecosystems and their conservation.

What makes this project particularly fascinating is that each expedition is streamed live from the depths, using high definition video. The cameras capture beautiful landscapes on the ocean floor, and zoom in for stunning, detailed close-ups of marine creatures. The beautiful glow of a dandelion siphonophore

The video stream allows scientists and enthusiasts alike to watch live footage from areas never before seen by the human eye. As the Discoverer explores, on-shore scientists provide an in-depth and educational commentary, and the audience can get involved by sending in questions or observations to the expedition’s comprehensive website.

Already, viewers have been treated to incredible footage from some of the deepest, darkest canyons – witnessing a myriad of cephalopods, echinoderms, crustaceans and fish, along with an incredible array of deep-sea corals, all expertly described by the scientists involved. Predation events have happened live on camera, with cutthroat eels and monkfish seen snatching unfortunate squid, while pale blue Graneledone octopuses have been seen hidden amongst the rocks, brooding their eggs (a commitment that can take up to 4 years!). A sea butterfly (actually a pteropod – a free-swimming snail) has been seen ‘flying’ past on beautiful wings, while a sea-toad (a type of anglerfish) provided contrast by clumsily swimming into a rockface.

For educational and inspirational current research, the live-stream experience is not to be missed. The Okeanos Explorer continues its expedition, exploring the depths of the Atlantic and recording essential data. Alongside the research, it provides a wonderful way to promote science and share its discoveries with anyone interested in the marine biosciences, geology, and oceanography. A brittle star rests atop a xenophyophore, a single-celled deep-sea organism.

Note: All images are screen-grabs and all credit goes to the NOAA and Okeanos Explorer team for the live streaming video from which they were captured.