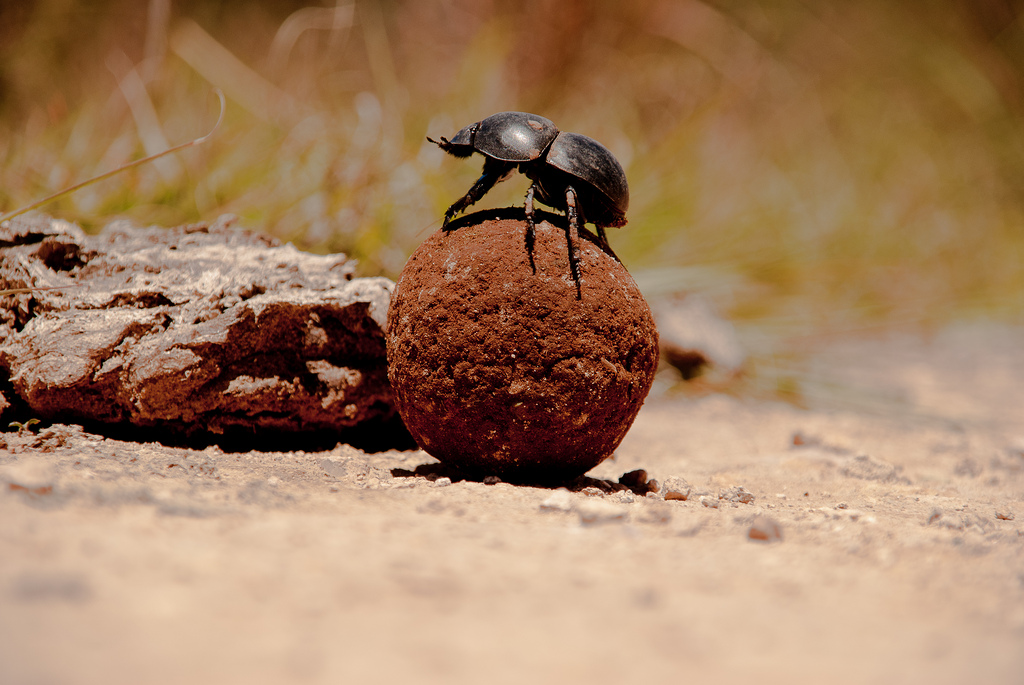 The Milky Way: shedding light on what keeps dung beetles on the straight and narrow

Humans have looked up at the night sky for thousands of years, and not just for a sense of existentialism; some have worshipped the stars, others have realised that there is an innate series of mathematical equations to be discovered within them. They led to the intrepid explorers from the Middle Ages onwards using the lights in the sky to voyage to new lands, and today inspire observation, exploration and slightly inane horoscopes. However, we are not the only stargazers on the planet.

A recent study discovered that dung beetles use the starry night skies to guide them through their habitats at night. This is a fascinating discovery which will surely change how dung beetles are studied, and perhaps even change how the public perceive the humble member of the Coleopteran order. Able to roll 10 times their own body weight, these beetles are small in size but not in strength, and now have a new skill. Not content with being the first species to provide proof of using the moon for navigation, the dung beetle now rolls into the exclusive club of birds, seals and humans who all use the stars to lead them on their journeys.

Birds are unique in the way they travel, so it follows that they are equally as specialised in how they navigate, by using the stars. Migrating birds cover vast distances; with the added confusion of an extra dimension of movement they require the use of a star navigation system to find their way. Studies indicate that although they don’t pinpoint their exact location, they appear to use a ‘star compass’; a learned geometric knowledge of star patterns to find north within the rotating starry sky.

Another group of animals that have been proven to use star navigation is seals. Harbour seals in particular have been shown to detect the presence of bright stars such as Venus and Sirius, and use these lodestars, literally meaning stars used to navigate by, to travel along star courses they have learnt. Great minds think alike; the indigenous people of Polynesia used the same method for thousands of years, and only in the last decade or so has this ability been registered in marine mammals.

Dung beetles are the latest creatures that scientists have found to use the night sky in their own particular way to navigate. Their two names, dung beetles and rollers, sum up the situation quite well. Upon capturing dung, a beetle will roll its bizarrely perfect ball in a straight line, despite obstacles, to use as a food source or brooding chamber. So how are they rolling it straight in the darkness?

Unlike birds or seals, dung beetles don’t use individual stars or lodestars but instead have been found to use bright light from clusters of stars, more specifically, the band of light emitted from the Milky Way. Researchers in South Africa tested this by collecting dung beetles of the species Scarabaeus satyrus and bringing them into the Johannesburg planetarium. There, they projected images of the cosmos on the dome above, and blackened the lower walls in the area, to ensure the results gathered were not affected by dung beetles using ‘landmarks’ to guide them instead.

The findings showed that the beetles navigated almost perfectly when shown a bright, starry panorama. More interestingly, when the images of the stars were removed, and the band emitted by the Milky Way galaxy was the only light present in the planetarium, the dung beetles performed just as well. The beetles have also been observed to use this bar of light from the galaxy in a variety of directions. Instead of simply moving parallel or at a 90O angle to the bar of light from the Milky Way, they travel in all manners of angles to find a place to safely eat their meals, out of the way of predators or dung snatching conspecifics.

Animals are tenacious in utilising all available resources, and its about time scientists started focusing on the night sky, an expansive map just asking to be used, as an important source of information for animals. This fascinating discovery will surely change the way dung beetles, and other nocturnal species, are studied. How many more species have the ability to harness the maths of the starts for their migrations and journeys? It’s known that crabs can visually interpret the stars with their compound eyes, much like the dung beetles, suggesting possible celestial navigation abilities in crustacean groups. Frogs, spiders, locusts and moths have all been suggested as potential candidate species for researchers to further test for this incredible ability.

However, anyone lucky enough to visit the homeland of these beetles will know that the night sky in South Africa is spectacular, overshadowing that in the UK even in the most remote areas. One might also see a problem here; increasing rates of urbanisation are leading to excessive levels of light pollution. How will this affect the growing number of species relying on clear skies to guide them? How many species in areas like the UK have already had to adapt in some way to overcome this? And finally how do street lamps, planes and the light haze produced by cities affect their navigation?

Maybe all of this research will afford the somewhat humorous dung beetle some well-deserved respect and awe, and get people excited about the strange and fantastic mechanisms at play in the natural world, and the importance of having clear skies above.