Hope for a tricky breeder: could new information safeguard the Iberian lynx from further declines?

The Eurasian lynx (Lynx lynx) is a beautiful and elusive cat that roams across much of Europe and Asia. Despite having faced historic declines, they are slowly starting to recover in Europe thanks to conservation efforts and government legislation (see here). In contrast their close relative, the equally stunning Iberian lynx (Lynx pardinus), isn’t having such luck. Restricted in range to the Iberian peninsula, this critically endangered felid is clinging on to existence. However, a recent study on its Eurasian cousin may offer new insights into conserving the species.

In the new study, scientists from Germany, Sweden and Norway have found Eurasian lynx have particularly long-lived corpora lutea (CLs). CLs are structures that form from the follicle after ovulation, and produce hormones which temporarily prevent further ovulation. 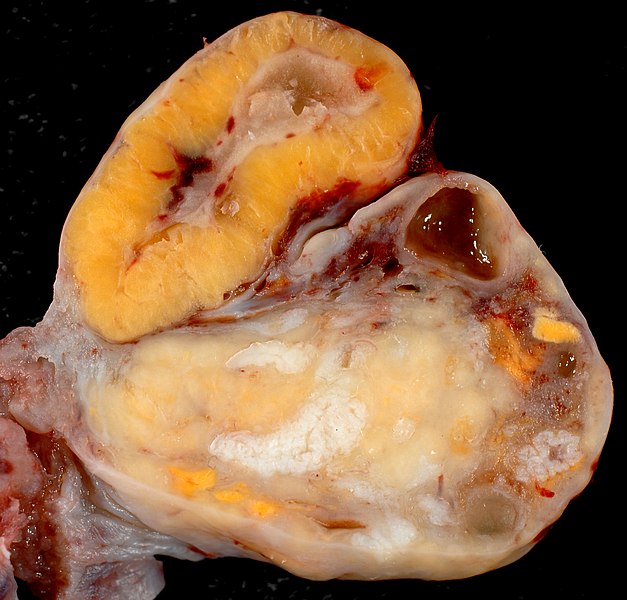 The upper yellow body is the Corpora luteum of a human ovary. Credit: Ed Uthman

The scientists used ultrasound to look at the reproductive organs of both captive and wild Eurasian lynx. It was found that CLs lasted for at least 2 years (the length of the study) and only experienced a gradual decrease in size, having a functional lifespan exceeding those of elephants (the previous record holder).

To allow for pregnancy, female lynx can switch off the CLs, preventing them from producing progesterone which would otherwise stop follicular development and ovulation. After birth, the CL is switched back on, and a second oestrus can therefore not occur in the same year. In other species, the CLs disappear before or just after birth.

Lynx have a mono-oestrus reproductive strategy, meaning they can only have one litter of cubs a year. This strategy is thought to be driven by the persistent CLs. This is markedly different to most other felines, which tend to be poly-oestrus, mating several times a year.

The researchers have speculated that the lynx evolved this mechanism to time births within specific periods of year, allowing them to take advantage of better ecological conditions, or potentially to prevent infanticide by males. Infanticide is very common in wild felids, particularly pumas and lions. Males kill a female’s cubs, bringing the female back into season.

This allows males to reproduce and share their genes instead of supporting another male’s cubs. By only being in oestrus once a year, killing cubs won’t bring a female back into season. And therefore the team knows of no cases of infanticide among wild Eurasian lynx.

This system makes the lynx more vulnerable to decline. Many larger populations experience hunter harvest at some level in late winter. This hunting is heavily male-biased, meaning there is a very real chance that population growth could be reduced even more than expected. Iberian lynx mothers only give birth to cubs once a year. Credit:

Pregnancy is very dependent on access to males during the single, crucial period of oestrus. If fertilisation doesn’t occur, the mother won’t contribute at all to a whole year’s population.

And what of the lynx’s ability to adapt to anthropogenic environmental changes? Their reproductive tactic is a non-plastic system, with little ability to naturally adjust birth dates and no ability to be in oestrus more than once a year.

However, it is hoped that this research will be able to aid the conservation of the dwindling Iberian lynx, improving techniques used to assist reproduction and boost the population. Future research is likely to focus on manipulating these long-living corpora lutea, allowing the female to have multiple litters every year. If researchers are able to increase the numbers of Iberian lynx cubs born in captivity each year, they can release more cubs, bolstering the wild population against its current decline.

You can read the paper here